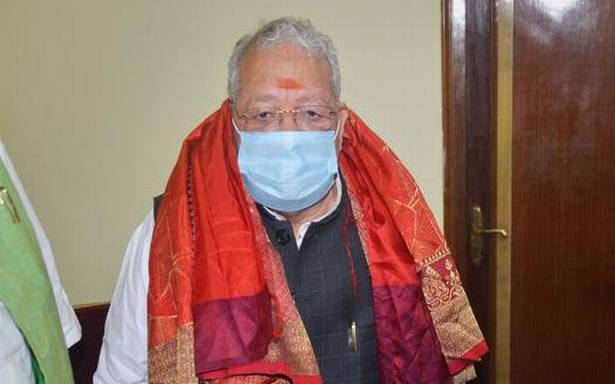 Buildings around the chemical factory were evacuated

A massive fire broke out a chemical factory in an industrial area here on Friday and it took the fire fighters nearly seven hours to douse the flames, officials said.

Though no one was injured, Governor Kalraj Mishra’s day-long visit to Kota was called off due to poor visibility caused by the fire.

Mr. Mishra was scheduled to land at the airport at around 11 am to participate in the fifth convocation of Agriculture University, Kota.

Officials roughly estimated the loss caused due to the fire in the Indraprastha Industrial Area under Vigyan Nagar police station limits to be around Rs 40-Rs 50 crore. Meanwhile, local Congress leaders lodged a complaint against GAIL Gas Limited and Kota Electricity Distribution Limited alleging that they did not stop the supply of gas and power for over two hours after the incident.

They alleged that the fire could have been controlled before it turned into massive flames had the two organisations turned off supply sooner.

At least 25 fire tenders were engaged to douse the massive fire flames, assistant fire officer at Kota Municipal Corporation Devender Gautam said. Besides, 5,000-6,000 litres of foam was used to control the fire. However, even after seven hours of operation, flames continued to erupt from the debris, he said. Though short circuit in the electric wiring is suspected to be the reason for the fire, the exact cause is being ascertained, police said.

In view of safety, buildings around the chemical factory were evacuated.