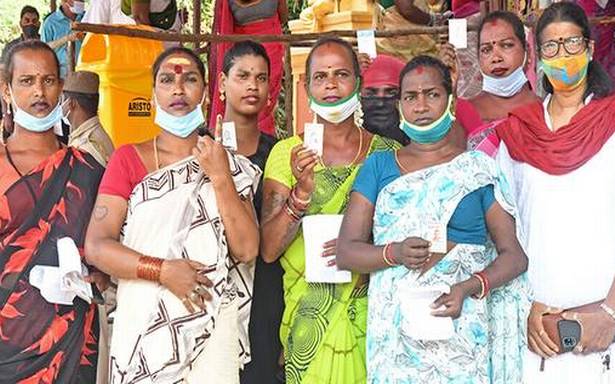 ‘This will help in formulating policies for this section’

Voters of the third gender want the next government in the Union Territory to conduct a survey to identify the number of transgenders and frame measures to bring them into the mainstream.

Sheetal Nayak, president of Sahodaran Community Oriented Health Development Society, told The Hindu, after voting in a polling booth at Ariankuppam, that the number of eligible transgender voters were much more than the figure with election authorities.

“I am sure the numbers will cross 1,000 in the U.T. if the government conducts a detailed survey. When many of us in the community desire to get a voter card, the authorities will direct us to get a birth certificate or other bona fide certificates to prove our identity. Where will we go because a majority of us are thrown out of homes and all the certificate to show our birth must have been destroyed by now,” Ms. Sheetal said.

No person would like to take alms for a living. Sheetal said it was circumstances that push a third gender person onto the streets. “People complain about our community members taking alms. What else do we do? Getting a house on rent is difficult and somehow if we manage to get one, how will we pay the rent? The government should at least provide free housing facility like they give for other vulnerable sections,” said Durga Renjitha, who voted at Bhoopalan Kalyanamandapam, Kakkayanthoppu, in Ariankuppam constituency.

Ms. Sheetal said the government could conduct a study to find out the number of transgenders and devise a programme to accommodate them in the mainstream by providing some training in skill development programme.