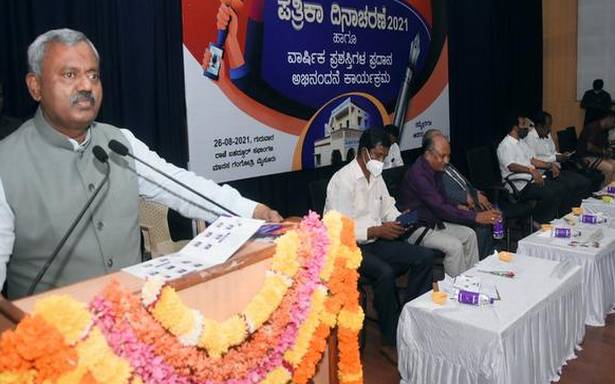 Minister in charge of Mysuru district S.T. Somashekar on Thursday thanked journalists for playing an important role in helping the government understand the pandemic situation and take steps accordingly.

Speaking after felicitating senior journalists and presenting the annual awards to journalists of Mysuru district at the Press Day celebrations organised by the Mysuru District Journalists’ Association (MDJA) here, he said the reportage of the journalists on the COVID-19 crisis facilitated the government in taking necessary measures. “The media drew the attention of the government to the unprecedented crisis, and assisted us in taking corrective steps in successfully fighting the pandemic.”

Referring to a short film screened on the occasion, he said the documentary showed the human side of journalists and how they rise to the occasion. It showed the crisis triggered from the pandemic and the imperceptible humanitarian efforts here.

On the occasion, Mr. Somashekar announced to would personally give ₹50,000 to each of the families of five mediapersons of Mysuru who died of COVID-19 and other reasons.

In his keynote address, Vice-Chancellor of University of Mysore G. Hemantha Kumar spoke about the roles and responsibilities of the media and explained why it is called the fourth pillar of democracy.

He thanked the mediapersons for putting up exceptional professionalism in discharging their duties during the COVID-19 crisis.

MDJA President S.T. Ravi Kumar spoke about how journalists here functioned during the COVID-19 crisis. He highlighted certain issues that required the government’s attention for the welfare of journalists.