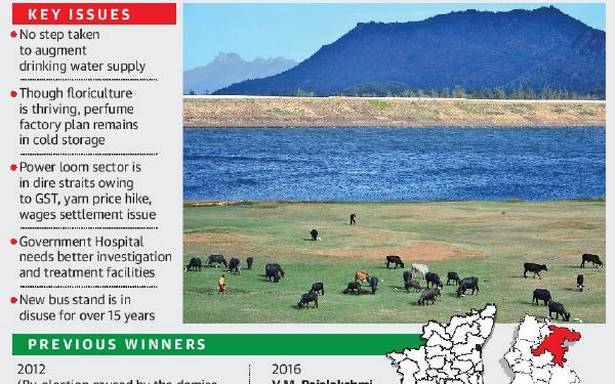 The Sankarankoil (Reserved) constituency in Tenkasi district, which is the bastion of the ruling AIADMK, is all set to witness an interesting contest this time as this backward segment continues to remain a constituency neglected by successive MLAs who went on to become ministers.

Though the district has five reservoirs – Gadana, Ramanadhi, Karuppanadhi, Gundar and Adavinainar – only the southern parts of the district get the ‘green cover’ with the water being released from these dams while Sankarankoil, situated on the northern side of the district is a rain-shadow region, is even struggling to get regular supply of drinking water. Consequently, rain-fed crops such as maize and cotton are being cultivated with well water. Floriculture is also carried out here.

If the damaged Shenbhagavalli Amman check dam, situated deep inside the Western Ghats west of Vasudevanallur and within the geographical boundary of Kerala, is reconstructed, the water getting diverted towards this region can irrigate lands in even Virudhunagar district. Unfortunately, no step has been taken by successive State governments for several decades and this region continues to be dry and the people have to run from pillar to post for drinking water during summer.

The constituency houses over 55,000 each of Thevar and Scheduled Caste voters and 30,000 each of Mudaliyar, Yadhava and Naicker voters.

However, the DMK is hopeful of wresting the stronghold by fielding a novice, Raja, as the Opposition party firmly believes that a rookie is enough to trounce a “non-performing minister,” as being tagged by the locals.

“When our party’s town secretary submitted a petition to the municipal authorities to take steps to supply drinking water at least thrice a week, he was threatened by the politicians. Even I got a call from the close relative of Ms. Rajalakshmi to be silent. But our fight for the people continues,” says T.M. Rajendran, Tirunelveli rural district secretary of MDMK.

When the 15,000-odd weavers were fighting for better wages, and the powerloom owners and the workers were protesting against the 15% GST and the unprecedented rise in yarn price, Ms. Rajalakshmi did nothing to end the indefinite strike. The agitation against the GST continued for more than 20 days. However, the minister remained a mute spectator even as 15,000 families relying on weaving were starving, charges N. Manickam, treasurer of the CITU.

“When ‘kadalaimittaai’ (groundnut candy) makers faced the GST issue, Minister for Information and Kovilpatti MLA Kadambur C. Raju took their representatives for a meeting with the officials and an amiable solution was arrived at. However, Ms. Rajalakshmi took no step to end the protest though she represents Sankarankoil, the land of power looms,” says Mr. Manickam.

He also charged that the minister did not take any steps for establishing perfume factory in Sankarankoil, one of the poll promises, where floriculture is a major industry, as in Thovaalai.

The seizure of a tractor, owned by the minister’s close relatives, after it was used for illicit sand mining, its forcible release from the taluk office and subsequent registration of case by the police has become a poll issue and is being used for electioneering in Sankarankoil against Ms. Rajalakshmi.

The voters also complain that the minister did not take steps for easing traffic congestion in Sankarankoil by operationalising the 15-year-old new bus stand which is crumbling due to disuse.

The people’s anger against the minister reflected during her campaign, as Ms. Rajalakshmi was not allowed to even enter most of the hamlets in Melaneelithanallur union. To make things worse, the voters from Thevar community, who are vehemently opposing 10.50% reservation given to Vanniyars even before the caste-based census is completed and demanding reservation in education and employment for them also, have made it clear that Ms. Rajalakshmi’s entry, defying their decision, would trigger unpleasant incidents.

The government hospital in Sankarankoil from where more than 80% of the cases are referred to Tirunelveli Medical College Hospital should be upgraded with better investigation and treatment facilities, the residents say.