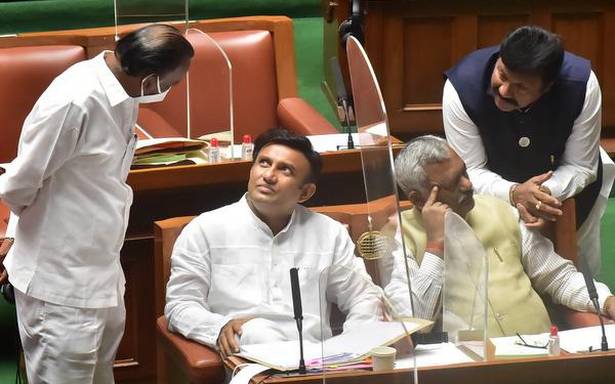 They met on July 19 night to take stock of situation

Speculation about a change in leadership in the BJP in Karnataka has caused concern particularly among ministers who came from other parties as a group to help the party form the government in the State.

As many as 16 MLAs from other parties had quit their Assembly membership and joined the BJP to cause the fall of the JD (S)-Congress government and helped formation of a BJP government led by Chief Minister B.S. Yediyurappa. Of them, 12 had been inducted into the ministry. Among them, Gokak MLA Ramesh Jarkiholi had to quit following allegations of him seeking sexual favours from a woman in return for a government job.

These legislators, who have become Ministers, are said to be anxious about their ministerial position if Mr. Yediyurappa were to be removed. This is because they were brought into the BJP by Mr. Yediyurappa, and they are loyal to him.

It is learnt that these Ministers met in Bengaluru on July 19 night. While there is no clarity on when and whether Mr. Yediyurappa would be removed and who would succeed him, the Ministers are learnt to have decided to maintain a united front to protect the privileges granted to them.

Some of the Ministers who reportedly attended the meeting include B.C. Patil and S. T. Somashekhar.