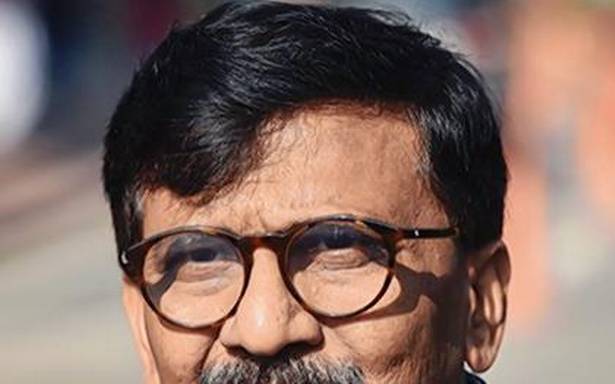 ‘Despite its sagging fortunes, one cannot say the Congress is finished,’ says Shiv Sena MP

His remarks, made in his column ‘Rokhthok’ in the Sena’s mouthpiece Saamna on December 12, reinforced the Sena’s growing affinity to the Congress which has been increasing since the Lakhimpur Kheri incident. The Sena leader spoke about his recent back-to-back meetings with Mr. Gandhi and with his sister and Congress general secretary Priyanka Vadra in Delhi.

“There is the greatest misperception being created and doubt being sown regarding Rahul Gandhi’s leadership… A picture is being painted that the Opposition is unwilling to unite under his leadership, thus leaving the political field wide open to [Prime Minister] Narendra Modi and the BJP. This is not true,” said the Sena leader.

Mr. Raut’s praise of Mr. Gandhi comes ahead of the latter’s scheduled visit to Mumbai on December 28. The Sena, Sharad Pawar’s Nationalist Congress Party (NCP) and the Congress share power in Maharashtra in the Maha Vikas Aghadi coalition.

The Sena leader further said that Ms. Banerjee had been raising questions on the United Progressive Alliance’s (UPA) existence, while remarking that the West Bengal CM wished to forge an opposition without the Congress.

“Ms. Banerjee is touring the country cobbling up an opposition against the BJP-ruled Centre. At this time, the question arises as to where is the Congress? When I met Mr. Gandhi to ask what he thought of Ms. Banerjee’s challenge to the UPA, he told me that despite her persistent jibes at the Congress and himself [Mr. Gandhi], he would not criticise her,” Mr. Raut said, in a subtle rebuke to Ms. Banerjee.

The West Bengal CM had met with Mr. Raut and Sena Minister Aaditya Thackeray during her visit to Mumbai on November 30.

However, since her visit, the Sena had admonished Ms. Banerjee, with a Saamna editorial stating that any attempt to create an opposition against the Modi-led BJP without the Congress would only serve to strengthen the hand of ‘fascist forces’.

Observing that the Congress faced its biggest ‘existential challenge’ today, Mr. Raut said that when he raised the issue of Congress old-timers like Captain Amarinder Singh and Ghulam Nabi Azad being upset with the party, Mr. Gandhi told him that despite the party having given them so much in the past, they were taking a different stance when the Congress had need of them today.

“Rahul Gandhi and Priyanka Vadra face a big challenge of keeping the party alive today… while the Congress has faced several existential crises in the past, the current period is the most critical that the party has ever experienced,” Mr. Raut said, adding that the end of the Congress would signal the end of India’s parliamentary democracy – something that the BJP was eagerly hoping.

The Sena leader nonetheless observed that the party was far from finished and it had successfully tided over every crisis facing its existence in the past.

“Following Pandit Nehru’s death, the Congress was defeated in eight States in the 1967 general election. While opponents at the time had written its political obituary, the party rose again. Despite the fact that the party’s fortunes had been declining since the past decade, one cannot say that the Congress’ days are numbered. One must remember that the party’s recent successes in the byelections in 13 States had compelled Prime Minister Modi to repeal the three farm laws,” said Mr. Raut.

The Sena leader further alleged that central agencies, particularly in Maharashtra and West Bengal, worked at the behest of the BJP.

“There is a fear being created…Ministers of the Maha Vikas Aghadi Government in Maharashtra are being pressured by the investigations by the Enforcement Directorate, the Central Bureau of Investigation and the Income Tax Department…Ms. Vadra told me she and her husband had received 69 notices from the IT Department before she travelled to Lakhimpur Kheri,” Mr. Raut said.

Incidentally, prior to the Lakhimpur Kheri incident, Mr. Raut had been generally disparaging of the Congress and Mr. Gandhi, ruing the party’s failure to lead a coordinated opposition to take on the Narendra Modi-led BJP Government at the Centre.

Yet, after the Lakhimpur Kheri incident in October, the Sena MP, who had conferred with Mr. Gandhi in Delhi at the time, had lavished praised on him while remarking that the Gandhi brother and sister were the “only leaders” who could provide an alternative to the BJP at the Centre today.

Despite being ideologically dissimilar parties, analysts say that the Sena feels that hitching its star to the Congress’ wagon may help reap indirect dividends for crucial local and regional polls while helping check the growth of the BJP in Maharashtra.