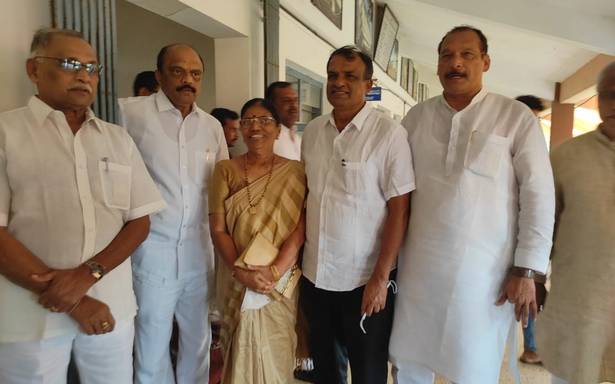 He run Sahyadri College of Engineering and Management in Mangaluru

Manjunath Bhandary filed his nomination papers as the Congress candidate for the December 10 elections to the Legislative Council from the local authorities’ constituency of Dakshina Kannada and Udupi, on November 23. It is a dual-member constituency.

Mr. Bhandary, 59, hails from Tenka Belluru village in Bantwal taluk of Dakshina Kannada. He holds a post-graduate degree in Political Science and a M.Phil degree. He earned a Ph.D. on the topic ‘Women’s Participation in Panchayat Raj’.

He had set up Bhandary Foundation, which manages Sahyadri College of Engineering and Management in Mangaluru. He had contested unsuccessfully against B.S. Yediyurappa of the BJP in the 2014 Lok Sabha elections from Shivamogga constituency.

By selecting Mr. Bhandary, the Congress has fielded a new face from the constituency, which is represented in the council by K. Pratapchandra Shetty of the Congress and Kota Srinivas Poojary of the BJP.

Mr. Shetty, a former banker from Halady village in Kundapur taluk in Udupi district, represented the constituency in the council for three consecutive terms since 2003. He served as Chairman of the council from December 2018 to February 2021.

Social Democratic Party of India (SDPI) has entered the fray in the constituency for the first time by fielding Shafi Bellare.

Social Democratic Party of India (SDPI) has fielded Shafi Bellare, who filed his nomination papers in Mangaluru on November 23, 2021.

Minister for Social Welfare and Backward Classes Welfare Kota Srinivas Poojary has already filed his nomination papers as the BJP candidate. In addition, Suprith Poojary has filed his papers as an independent candidate.