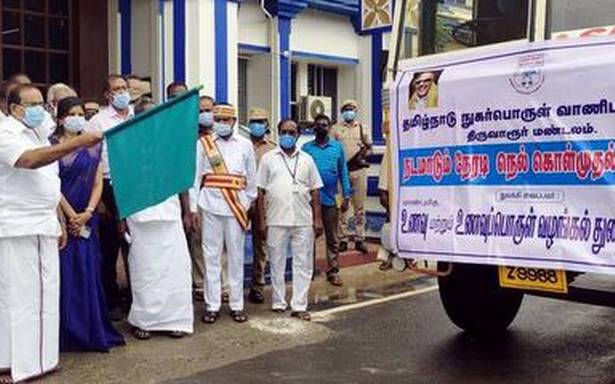 The eight taluks in the district will have one each

Paddy procurement through mobile DPCs has been revived by the Tamil Nadu Civil Supplies Corporation in view of the consistent demand for the service from delta farmers. The mobile DPC vehicle would visit villages to collect the paddy bags kept ready by farmers as per the specifications laid down by the Corporation.

At present, one vehicle per taluk would be pressed into service in Tiruvarur district which has been divided into eight taluks. In order to avail the facility, farmers who had harvested a minimum of 1,000 bags of paddy should contact the office of the Senior Regional Manager, TNCSC at Tiruvarur or the offices of the Deputy Manager, TNCSC at Tiruvarur or Mannargudi and place their request to avail themselves of the mobile facility, an official said.

After flagging off the mobile DPCs on the District Collectorate campus, the Civil Supplies Minister inspected the Corporation’s gunny unit complex at Kachanam in Thiruthuraipoondi taluk where he told reporters that already 265 DPCs were functioning in Tiruvarur district and 19,500 tonnes of paddy had been procured during the current 2021-22 procurement season.

Instructions had also been issued to the officials to open DPCs at places from where such requests emerged from farmers, he added.

The Minister also inspected a site identified for the construction of a temporary godown at Vandampalayam and Morden Rice Mill at Tiruvarur.

Later talking to reporters at Thennamanadu in Orathanadu block, the Food Minister said that as many as 249 DPCs had been opened in Thanjavur district.

Later, after inspecting the DPCs at Thirukuvalai and Neermulai in Nagapattinam district, Mr. Sakkarapani said that about 65,000 tonnes of paddy was expected to be procured through the 85 DPCs in the district.

Since money was being disbursed immediately, farmers were keen on selling their produce at the DPCs run by the Tamil Nadu Civil Supplies Corporation and the quantum of procurement is expected to exceed the previous year’s achievement, he said.

The Collector has sent a detailed report to the TNCSC recommending repairs to DPC buildings damaged in cyclone Gaja and construction of own buildings for 26 DPCs in the district. Farmers have sought the establishment of a rice mill by the TNCSC and provision of paddy driers. The demands would be taken up with the Chief Minister, the Minister assured.

The Minister instructed the officials to repair the approach roads to the DPCs in Thirukuvalai and Neermulai. Collector A. Arun Thamburaj and other officials accompanied the Minister.