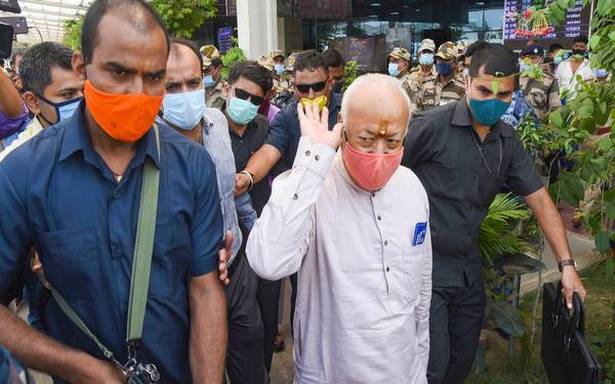 Centre was responsible for the loss of 14 crore jobs in the last 18 months, alleged Congress’ national spokesperson

Congress national spokesperson Mohan Prakash on Tuesday alleged the Narendra Modi government was pushing the country into "economic slavery" on the directions of RSS chief Mohan Bhagwat and said the Centre was responsible for the loss of 14 crore jobs in the last 18 months.

Accusing the government of "finishing" the businesses of small traders, he also demanded a probe into the "Amazon bribery scandal".

"We can understand that the pandemic period caused unemployment but who is responsible for what happened due to demonetisation (in 2016)? Will there be someone responsible for the problems faced by small businesses due to GST rollout and what will happen to those who lost their jobs?" Mr. Prakash questioned while addressing a press conference in Nagpur, the headquarter of Sangh.

It seems that on the direction of Mohan Bhagwat, the Modi government is taking the country into economic slavery, he said.

"14 crore jobs were lost due to Modi government in the last one-and-a-half years. We want to ask (about the reason) to Mohan Bhagwat because a humble swayamsevak is the Prime Minister of India," Mr. Prakash said.

In a similar vein, he said American e-commerce company Amazon had paid ₹8,546 crore in the name of legal fees.

"While the Law & Justice ministry’s annual budget is ₹1100 crore, Amazon had paid ₹8,546 crore over two years allegedly as legal fees. Scandalous disclosure has now brought that this amount was paid as alleged bribes. Even Amazon has partially admitted this bribery scandal," he alleged.

Mr. Prakash wondered whether the "Amazon bribery scandal" should be investigated by a sitting judge of the Supreme Court.

Speaking about the Lakhimpur Kheri incident, he said India is going through a very serious phase, "wherein a Minister ‘s son is killing people under the wheels of his car and the Yogi Adityanath government does not want any political leader to visit Lakhimpur".

"The way (Congress leader) Priyanka Gandhi Vadra was treated and misbehaved with has never happened with any senior leader of any party. The Congress was also in power but it never stopped any opposition party leader from visiting anywhere or insulted (opposition leaders). The case may be different if there was communal violence when people are stopped from visiting, but this is autocratic behaviour," he alleged.

Congress general secretary Priyanka Gandhi Vadra and other party leaders were detained on Monday when they were going to meet the victims of the violence that erupted during a farmers’ protest in Lakhimpur Kheri a day earlier.

Eight people were killed as violence erupted during a farmers’ protest, claiming the lives of both farmers and BJP workers ahead of a visit to Lakhimpur by Uttar Pradesh Deputy Chief Minister Keshav Prasad Maurya.