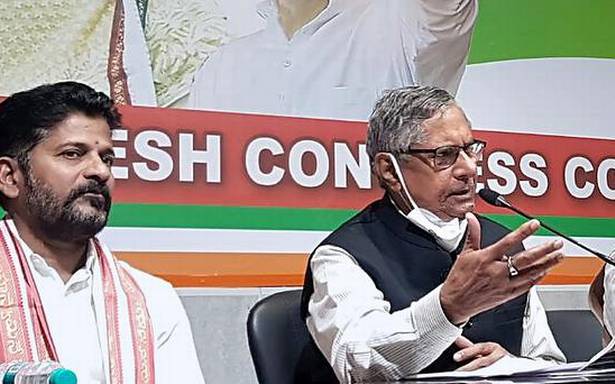 ‘The country is seeing the highest rate of unemployment’

Stating that the Narendra Modi government’s new year gift to the nation was inflation and price rise, Congress national spokesperson Mohan Prakash said the revised GST slab rates will increase tax on goods that are part of the lives of 80% of people.

Mr Prakash, who was in Hyderabad as part of Congress’ campaign against Modi government’s ‘loot’ of the country, said the country was seeing the highest ever unemployment and the inflationary pressure mounting at 14.23% – the highest in the last 10 years. But this government was least bothered unlike the previous governments that had intervened to ease pressure on the common man.

Speaking to reporters along with TPCC president A. Revanth Reddy, working president Mahesh Kumar Goud and senior leaders Mallu Ravi, Sravan Dasoju and Vinod Reddy here, he said the new year will force the poor and middle class to spend more on basic needs including clothes, footwear and even withdrawing own money from the ATMs.

He said with the government increasing the GST on textiles from 5% to 12% (which has now been deferred till February 28) the impact is more on clothes purchased by the common man given that 85% of the clothes sold are priced below ₹ 1,000. Similarly, the GST rate on footwear costing up to ₹1,000 per pair has also been hiked from 5% to 12%. The FMCG (Fast Moving Consumer Goods) prices will increase by up to 10% from this month, while people have to pay more for withdrawing their own money from the ATMs. He said the Modi government had not even spared auto-rickshaw and taxi rides imposing 5% GST on the bookings through apps from January 1. Prices of automobiles, cement and steel had also gone up due to the increased taxes, he said, adding except the top businessmen of the country no one was spared.

All that Modi government did in the last 7 years was to increase petrol prices from ₹71 per litre to ₹108; cooking gas cylinder from ₹400 to ₹1000; cooking oil from ₹ 90 to ₹250 per Litre; pulses from ₹60 per kg to ₹150 per kg and even tea from ₹120 per kg to ₹300 to ₹400 per kg. He said the TRS and YSRCP governments in Telangana and AP respectively too were responsible for this chaos as they continue to support the Modi government and they cannot escape from people’s wrath.