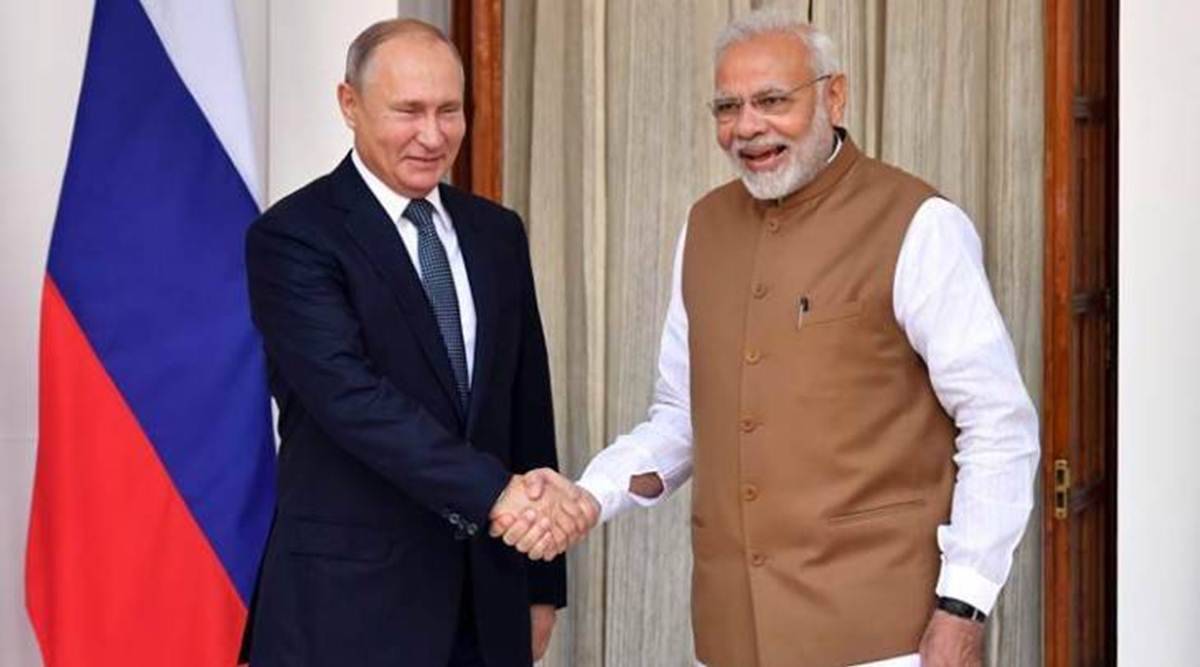 Underlining concerns about Pakistan-based terrorist groups, India extended its hand to deal with the humanitarian situation in Afghanistan, and also called upon the Taliban — without mentioning or criticising them — to ensure an inclusive governance structure in the country. A week into the evacuation of more than 800 people from Afghanistan — mostly Indians and some Afghans — New Delhi on Tuesday stepped up diplomatic engagement with key countries with stakes in the region.

Underlining concerns about Pakistan-based terrorist groups, India extended its hand to deal with the humanitarian situation in Afghanistan, and also called upon the Taliban — without mentioning or criticising them — to ensure an inclusive governance structure in the country.

A day after he discussed the situation in Afghanistan with German Chancellor Angela Merkel, Prime Minister Narendra Modi spoke to Russia’s President Vladimir Putin on Tuesday. The two leaders “agreed to form a permanent bilateral channel for consultations” on this issue, the Russian government said in a statement.

“They expressed intention to enhance cooperation on countering the dissemination of the terrorist ideology and the drug threat emanating from the territory of Afghanistan,” the Russian statement said.

The two sides noted the “importance of coordinated efforts” for the establishment of peace and stability in Afghanistan, ensuring security in the region as a whole, it said.

The Ministry of External Affairs said the leaders discussed the “unfolding situation in Afghanistan and its implications for the region and the world”. They agreed it was important for the strategic partners to work together, and instructed their senior officials to remain in touch, the MEA said.

Later in the day, National Security Advisor Ajit Doval chaired a meeting of the NSAs of the BRICS (Brazil-Russia-India-China-South Africa) countries, where India “raised the issue of cross-border terrorism and activities of groups such as the Lashkar-e-Toiba and Jaish-e-Mohammed which enjoy State support and threaten peace and security”.

The meeting of the “High Representatives Responsible for National Security” — attended by Russia’s General Nikolai Patrushev and China’s Yang Jiechi among others — “reviewed the regional and global political and security scenario with particular reference to current developments in Afghanistan”, among other issues.

They also discussed Iran, West Asia, and the Gulf, and emerging threats to national security, such as cyber security. Other items on the agenda were cooperation among law enforcement agencies, health safety and healthcare, and counter-terrorism, the MEA said.

The meeting also adopted and recommended the BRICS Counter Terrorism Action Plan for consideration by the BRICS Summit. The Action Plan aims to further strengthen existing mechanisms of cooperation in areas such as financing and combating terrorism, misuse of the Internet by terrorists, curbing travel of terrorists, border controls, protection of soft targets, information sharing, capacity building, and regional and international cooperation.

Without referring directly to Taliban-ruled Afghanistan, the MEA statement said that “considerable attention was paid to the heightened risk of growth of illegal drug production and trafficking in the region. It was agreed that concerned agencies in BRICS countries will enhance their cooperation in this area”.

In Geneva, at the 31st special session of the UN Human Rights Council on the serious human rights concerns and situation in Afghanistan, India’s Permanent Representative Indra Mani Pandey said, “Stability in Afghanistan is linked to the peace and security of the region. We hope that the situation in Afghanistan does not pose a challenge to its neighbours and its territory is not used by terrorist groups such as Lashkar-e-Taiba (LeT) and Jaish-e-Mohammed (JeM), to threaten any other country.”

India was, however, careful and calibrated about the Taliban — it did not name or condemn the hardline movement in its statement at the UNHRC.

“We are closely monitoring the rapidly evolving security situation in Afghanistan and we continue to call upon parties concerned to maintain law and order, ensure the safety and security of all Afghan nationals, UN personnel and diplomatic staff members, and observe human rights and international humanitarian law in all circumstances,” India said.

Pandey said India “stands ready to assist our friends from Afghanistan in fulfilling their aspirations… We hope that the situation stabilises soon, and the parties concerned address the humanitarian and security issues.”

India also said it hoped that there is in Afghanistan “an inclusive and broad based dispensation which represents all sections of Afghan society”.

“Voices of Afghan women, aspirations of Afghan children and the rights of minorities must be respected. A broad based representation would help the arrangement gain more acceptability and legitimacy,” it said.

This is the clearest that the Indian government has so far been about its position with respect to Taliban-ruled Afghanistan.

External Affairs Minister S Jaishankar said 78 people were brought to India on Tuesday from Kabul via Dushanbe. Two ministers, Hardeep Singh Puri and V Muraleedharan, went to the airport to receive the Afghan Sikhs who came with three copies of the Guru Granth Sahib.