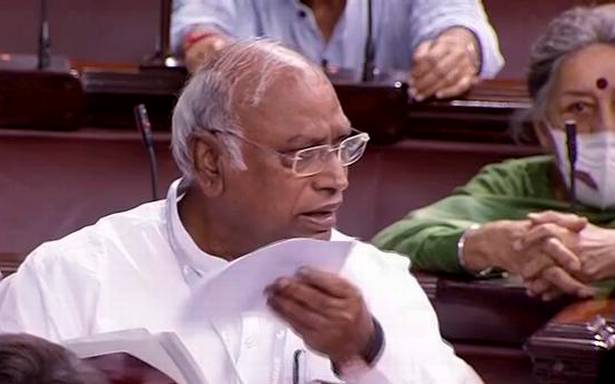 Leader of the Opposition in Rajya Sabha, Mallikarjun Kharge sees the National Monetisation Pipeline (NMP) of the Modi government robbing off the hard-earned reservations for the scheduled classes, scheduled tribes and backward classes with the Congress-created assets landing in the hands of a few individuals.

Mr. Kharge said the intellectuals’ silence on this ‘selling spree’ will harm the nation not just financially but also socially. This is a danger that is camouflaged in the name of monetisation policy, he said in Hyderabad. He was addressing the media as a part of the Congress party’s nationwide campaign against monetisation.

He said the mixed economy concept of the first Prime Minister Jawaharlal Nehru created 89 Public Sector Undertakings (PSUs) that changed the very course of development in modern India with assets created and the economy growing strengthening people financially. But the Modi government just wants to blindly sell these precious assets instead of creating more.

Ridiculing the Bharatiya Janata Party’s defence on monetisation, he said the proposed national assets to be monetised were earning ₹3.5 lakh crores for the government. Some units were incurring the loss of ₹45,000 crores but even if that is excluded, the government still earns ₹3 lakh crores. Giving some examples, he said selling off 26,700 km of roads for ₹1.6 lakh crore, 400 rail stations, and tracks for ₹1.5 lakh crore, power transmission lines worth ₹45,200 crore, power generation plants worth ₹39,832 crore will play havoc with the lower and middle classes as toll taxes, travel fares and power charges are bound to multiply.

Stating that the BJP’s concept was ‘Looto aur Baato’, he said the BJP had to acknowledge that the Congress governments had created these assets over 70 years for them to sell. They have exposed their charges that the Congress did nothing in the last 70 years.”

Mr. Kharge agreed that Congress governments too sold some assets but they were few and the loss-making ones only unlike the BJP that is selling strategic assets. Moreover, the track record of the Modi government’s selling encouraged monopoly with few individuals benefitting than the nation.

The Congress leader also reminded how cities like Hyderabad and Bengaluru burst with economic growth due to the PSUs established here in the last 7 decades. That ecosystem led to lakhs of people gaining financially, socially and educationally because of the PSUs and strategic assets created.