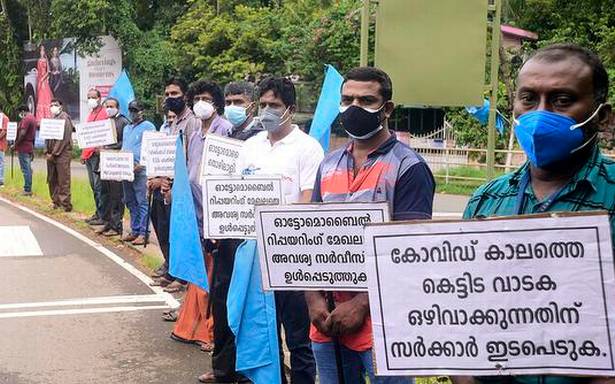 The district administration will strengthen restrictions on social life in Kozhikode in view of the recent rise in number of COVID-19 cases here. It was decided at a meeting of the district disaster management authority chaired by District Collector N. Tej Lohit Reddy on Thursday.

It was pointed out that the number of cases had crossed 2,000 recently. As the test positivity rate (TPR) was not declining and more people are getting infected across the State, officials were asked to ramp up testing. Places such as Palayam market, mofusil bus stand, KSRTC bus stand, and S.M. Street would be disinfected. Vehicles would be seized if travellers are found to venture out for unnecessary reasons. Mr. Reddy dismissed the claim that calculation of TPR was unscientific. More than 10 persons would not be allowed to participate in weddings and funerals in local bodies which have a TPR above 15%.

Local bodies were asked to restart COVID control rooms. Mr. Reddy directed officials to shift all the infected persons without quarantine facility at their home to domiciliary care centres. More police personnel would be deployed to monitor adherence to pandemic protocol. Those who interact more with the public should have either COVID negative certificate or vaccination certificate with them. Shop owners, hotel and restaurant staff, and taxi drivers should produce results of antigen or RT-PCR tests to inspecting officials. If primary contacts and family members of people under home quarantine are found to violate restrictions, they would be shifted to government quarantine centres.

The district administration has declared wards with over 50 cases in the Kozhikode Corporation and those with over 30 cases in municipalities and grama panchayats as containment zones. Public travel has been restricted in these places.

The district administration and the Health Department would jointly conduct testing camps at primary health centres, family health centres, taluk hospitals, district hospital, and health centres under the Kozhikode Corporation. People who stand a chance to have contact with infected persons, those with symptoms, family members of infected persons, and employees of shops could make use of it. District Medical Officer V. Jayasree said that failure to detect infected persons would lead to the spread of the pandemic to more persons, rise in TPR, and prolonged lockdown. Mr. Reddy directed all local bodies to increase testing.

Meanwhile, 1,586 fresh cases were reported in the district on Thursday, of which 1,568 were due to local transmission of the infection. The source of 14 others was not known. The daily TPR was recorded to be 16.27% when 9,933 samples were tested. Kozhikode Corporation had 288 cases of locally acquired infections, Velam 167, and Maniyoor and Olavanna 63 each. As many as 1,427 people recovered from the infection and the active caseload from the district is 18,686.