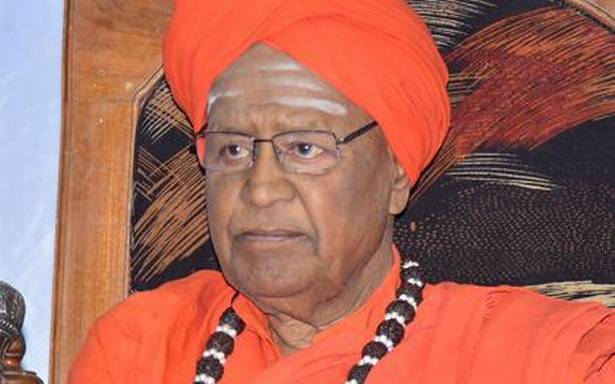 Among the seers who spoke in support of the CM, Sri Sangana Basava Swami of Kottur Veerashaiva Shivayoga Mandir was the most vocal.

He told journalists in Hospet on Wednesday that a RSS conspiracy was behind the plans to remove Mr. Yediyurappa. He declared that the community was fully behind Mr. Yediyurappa and would not accept another Lingayat leader like Jagadish Shettar replacing Mr. Yediyurappa as the CM.

“RSS is a caste-based organisation. Its leaders are not liberal minded. In Maharashtra, millions of Maratha youth worked hard and brought the BJP to power. But its leaders thrust Devendra Fadnavis, a Brahmin, as the CM of Maharashtra. The government did not function well. The party also lost the sympathy of the Maratha community. RSS may think that the same game can be played in Karnataka, but they are wrong. There are reports that RSS wants to replace Mr. Yediyurappa with (Union Minister for Mines) Pralhad Joshi. But that will not work. If the BJP replaces Mr. Yediyurappa on the directions of the RSS, BJP will have to lose its existence. That may even benefit the Congress or JD(S),” he said.

He demanded that the BJP high command announce that Mr. Yediyurappa will not be disturbed till the end of his term. Lack of such strong statements from the party is leading to confusion, he said.

“Mr. Yediyurappa is a strong and efficient leader. He should be allowed to complete his term. There is no need to replace him, even with a Lingayat leader like Jagadish Shettar. The party can consider making a deprived class leader, like Govind Karjol as the CM. But this is not the time for such changes,” he said.

The seer said that the BJP high command had reduced the effectiveness of Mr. Yediyurappa’s administration by its constant interference. “Mr. Yediyurappa has handled COVID-19 and the floods very effectively. But if the BJP had given him a free hand, he would have been even more effective,” he said.

In Basava Kalyan, Sri Basavalinga Pattaddevaru, chairman of the Anubhav Mantap Trust committee called for restraint on the part of the BJP high command.

“I am surprised at media reports that the BJP plans to remove Mr. Yediyurappa from the post of CM. Mr. Yediyurappa has been working for decades to build the party and bring it to power. He is the main reason for the rise of the BJP in south India. If he is disturbed, the party will suffer. Everyone knows this. But if he is allowed to complete his term, it will benefit everyone,” he said. “Mr. Yediyurappa’s age should not be a disqualification. It should instead work in his favour. BJP should utilise his services and benefit from his experience. Twice he suffered COVID-19 infections. But he worked for the development of the State restlessly. He has been working for the welfare of all castes. He is working for reconstruction of the Anubhava Mantapa and rebuilding the graves, prayer caves and monuments related to Sharanas. All heads of mutts are behind him. He enjoys the support of all members of the Lingayat community, across party lines.”

Sri Rajeshwar Shivacharya Swami of Tadola Mutt alleged in Basava Kalyan that the BJP was oblivious of the contribution of Mr. Yediyurappa. “He brought the BJP to power for the first time in south India 10 years ago. Even now, the party came to power because of him. This cannot be forgotten. He should be allowed to complete his term. Some people are saying he is being eased out due to his age. These are lame excuses. A man’s contribution to society is measured by his energy and spirit, and not his age,” he said.

“BJP will create problems for itself if it removes him. If it is looking for alternative leadership, it should groom some leaders first by giving them various positions of power. No one should be appointed as the CM suddenly. You cannot create leaders out of thin air. What is more, no one should be declared the leader by moving out Mr. Yediyurappa,” the seer said.