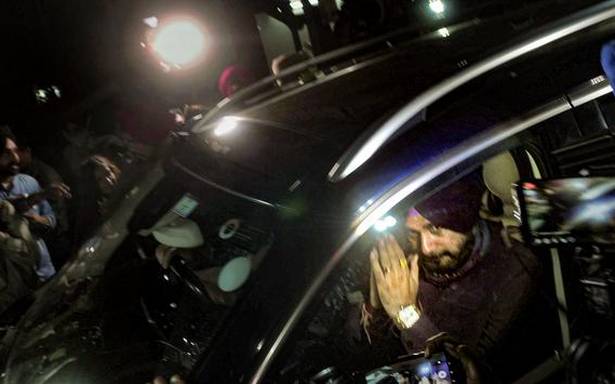 India on Thursday hit out at China for attempting to blame it for the eastern Ladakh standoff, asserting that the "provocative" behaviour and "unilateral" attempts by the Chinese military to alter the status quo along the Line of Actual Control (LAC) in the region seriously disturbed peace and tranquillity in the region.

Monsoon may withdraw from next week

The monsoon is likely to begin withdrawing from the mainland from October 6, said the India Meteorological Department as the country recorded an average of nearly 87 cm of rainfall across subdivisions, just short of the nearly 88 cm it normally receives during the monsoon

Negotiating China’s rise in the world was largely a bilateral matter, External Affairs Minister (EAM) S. Jaishankar said on Friday, in the context of Quad countries’ handling of China’s ascent.

The fresh crisis in the Punjab Congress, emerging after its State chief Navjot Singh Sidhu quit his post on the issue of inducting ‘tainted’ leaders and controversial officials in the new government, showed sign of easing on Wednesday, though Mr. Sidhu has not yet announced a withdrawal of his resignation.

Covaxin data given to WHO for nod

All data for Covaxin clearance has been given to the World Health Organisation (WHO), said Indian Council of Medical Research (ICMR) Director General Dr. Balaram Bhargava at a press conference on Thursday.

The Ministry of Home Affairs (MHA) has extended the deadline till December 31 for NGOs to apply for renewal of their Foreign Contribution (Regulation) Act (FCRA) registration certificates. The registration is mandatory for associations and NGOs to receive foreign funds.

Rich countries need to do more on climate change : Jaishankar

External Affairs Minister S. Jaishankar suggested that rich countries needed to do more in terms of their climate commitments and allow developing countries the space to grow. His comments were made during a discussion with former U.S. Ambassador to India, Frank Wisner, organised by the U.S. India Strategic Partnership Forum, an advocacy group.

North Korea says it has test-fired an anti-aircraft missile

North Korea says it has test-fired an anti-aircraft missile in the fourth round of weapons launch this month. The Korean Central News Agency said Friday the test-launch performed on Thursday is “of very practical significance in studying and developing various prospective anti-aircraft missile system.”

Josh Hazlewood’s bowling of subtle movement and alterations in speed, length and angles is like a revolving door. You never know what’s in store. Hazlewood, his run-up, load-up and release, in perfect harmony, proved a game-changer with three for 24 as Chennai Super Kings, restricting Sunrisers Hyderabad to 134 for seven, won by six wickets to ensure qualification in their IPL clash at Sharjah on Thursday.

Chris Gayle withdraws from IPL due to bubble fatigue

Star player Chris Gayle has decided to leave the IPL’s bio-secure environment due to "bubble fatigue", his team Punjab Kings said on Thursday. Gayle had played two games for the team since IPL’s resumption and now wants to refresh before the T20 World Cup beginning next month.

Corruption, one of the limitations of Dravidian model of growth, says N. Ram

Political corruption has been one of the limitations of the successful Dravidian model of growth and social development and deep measures are needed to address it, said N. Ram, Director, The Hindu Group Publishing Private Limited.