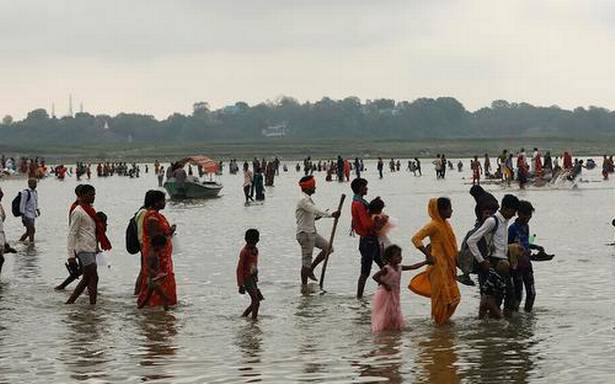 Extensive studies have been undertaken and discussed over the last two years before arriving at a broad plan to create four integrated triservice commands, an official said on Monday. However, the IAF still has major reservations on the issue, said the official.

Discarded bodies did not add to Ganga pollution: Ministry

The dumping of bodies in the Ganga, allegedly of those who died of COVID-19, did not increase pollution in the river, the Jal Shakti Ministry has said. The National Mission for Clean Ganga (NMCG) had solicited reports in May from the Centre, and State Pollution Control Boards of Uttar Pradesh and Bihar, and the Central Water Commission on whether the disposal of cadavers in the river had affected water quality.

Vaccination drive | More than 82 lakh shots administered in a day

Jammu and Kashmir regional parties which are not part of the Gupkar alliance held deliberations on Monday to discuss the upcoming meeting with Prime Minister Narendra Modi and called for “durable and democratic solutions” to the challenges in Kashmir.

The National Human Rights Commission (NHRC) on Monday set up a committee to investigate complaints of post-poll violence in West Bengal in accordance with a Calcutta High Court order on June 18.

Days after the coup spearheaded by his uncle Pashupati Kumar Paras, beleaguered president of the Lok Janshakti Party Chirag Paswan speaks on role of the JD (U) and BJP and betrayal by loved ones, insisting that most of the party is still with him.

Larger businesses in several COVID-19-affected sectors may make it through the pandemic’s deleterious effects, but smaller companies may not survive as income and job losses pile up and weaken demand, said Tata Steel chief and Confederation of Indian Industry (CII) president T.V. Narendran, seeking urgent measures to pre-empt a meltdown.

Army to get indigenous light helicopters by Dec. 2022

The Army, which is facing a huge shortage of light utility helicopters with the ageing fleet of Cheetah and Chetak helicopters, will receive the first batch of six indigenous Light Utility helicopter (LUH) by the end of 2022, a defence source said. The LUH was designed and developed by Hindustan Aeronautics Limited (HAL).

The Centre is assessing how badly school students have been hit by the COVID-19 pandemic, and will collect States’ surveys on digital education access and learning losses by the end of this month, the School Education Department told a parliamentary panel on education on Monday.

Iran’s President-elect said on Monday he would not meet with President Joe Biden nor negotiate over Tehran’s ballistic missile program and its support of regional militias, sticking to a hard-line position following his landslide victory in last week’s election.

WTC final | Fourth day washed out without a ball bowled

The fickle English weather played spoilsport in a game promising a high quality contest as day four of the inaugural World Test Championship final between India and New Zealand was washed out due to rain.