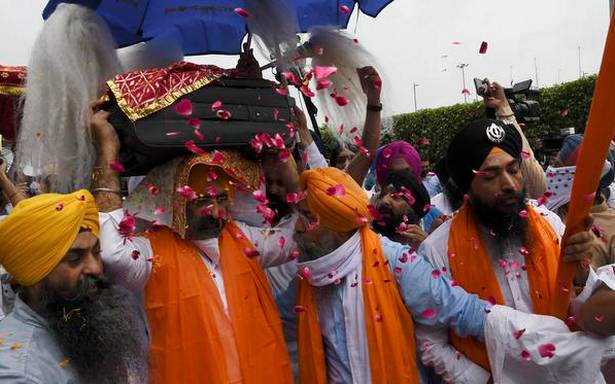 Intolerance and vandalism in Afghanistan of worldwide concern: India

Addressing the weekly press briefing of the Ministry of External Affairs, official spokesperson Arindam Bagchi said the international community continues to insist that the Taliban should fulfil the goals outlined in the UN Security Council Resolution 2593 that expects the Taliban to form an inclusive government and foster freedom and diversity.

The Uttar Pradesh police have arrested two persons and issued a summon to Ashish Mishra, son of Union Minister of State for Home Affairs Ajay Mishra, for questioning in connection with the Lakhimpur Kheri incident.

U.K. to drop 10-day quarantine for Indians from October 11

Indian travellers arriving in the United Kingdom will not be required to remain in mandatory 10-day quarantine from October 11, British High Commissioner Alex Ellis announced on Thursday. The announcement was made as part of the revised British policy regarding international travel to the U.K., which will be continuously reviewed by health officials in London to track spike in cases of COVID-19 abroad.

Amid growing frustration that the prime accused in the Lakhimpur Kheri case has still not been arrested four days after the incident, the Samyukt Kisan Morcha (SKM) platform of protesting farm unions will hold its general body meeting at the Singhu border on October 8 to decide on the next course of action.

The Principal and a teacher of a government school in Srinagar were shot dead inside the school on Thursday.

The Supreme Court on Thursday emphasised that girls should not lose their opportunity to take the entrance exam in December 2021 for admission to the Rashtriya Indian Military College (RIMC).

A court in Mumbai on Thursday sent Aryan Khan, the son of Bollywood actor Shah Rukh Khan, and seven others to 14-day judicial custody in connection with the alleged seizure of banned drugs from a cruise ship off the Mumbai coast. Their bail applications will be heard on Friday, the court said.

India will partially restore tourist visa facilities from October 15 for foreigners who want to come here in chartered flights, the Home Ministry said on Thursday. Also, foreign tourists on air bubble flights will be allowed from November 15, an official said.

Reliance Retail to roll out 7-Eleven convenience stores in India

India estimated to grow at 8.3% in the current fiscal: World Bank

India’s real Gross Domestic Product (GDP) in the current fiscal year is estimated to grow by 8.3%, the World Bank said as it released a South Asia economic focus report ahead of its annual meetings which start next week in Washington. This growth estimate is supported by an increase in public investment to bolster domestic demand and schemes, like the production-linked incentive to boost manufacturing.

U.S. President Joe Biden and Chinese President Xi Jinping have agreed “in principle” to have a virtual meeting before the end of the year, according to senior U.S. administration officials. The decision came out of a six-hour meeting in Zurich late on Wednesday between U.S. National Security Adviser Jake Sullivan and Chinese Politburo member and top diplomat Yang Jiechi.

A 100-year-old man is going on trial in Germany on October 7, accused of being an accessory to murder for serving as a Nazi SS guard at the Sachsenhausen concentration camp near Berlin during World War II.

India will have to wait for its first woman world champion in wrestling as Anshu Malik settled for a silver medal after losing her 57kg final to 2016 Olympic champion Helen Lousie Maroulis but Sarita Mor grabbed her maiden medal at the big stage by winning the 59kg bronze, here on Thursday.

IPL 2021 | Still uncertain whether I will be playing next year, depends on retention policy, says Dhoni

The enigmatic Mahendra Singh Dhoni has no doubt that he would be seen in yellow even in 2022 but at this point, he does not know whether that yellow would be representative of his franchise Chennai Super Kings in the IPL.

Kolkata Knight Riders produced a clinical performance to beat Rajasthan Royals by a massive 86-run margin and virtually assure their play-off berth in the Indian Premier League Sharjah on Thursday.

CSK scored 134 for six against Punjab Kings after being put in to bat. Faf du Plessis top-scored for CSK with 76 off 55 balls while Arshdeep Singh and Chris Jordan impressed with the ball for Punjab, taking couple of wickets each Punjab chased down the target comfortably with K L Rahul leading from the front and making an unbeaten 98 off 42 balls.