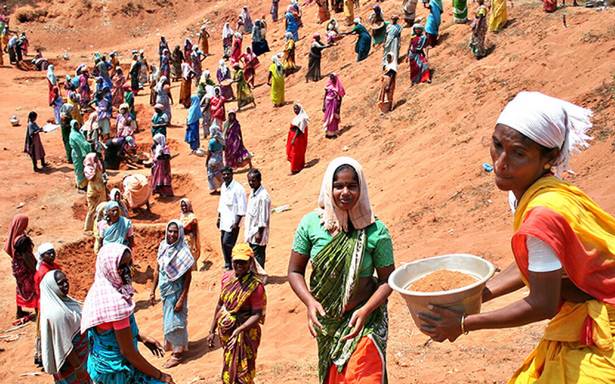 No money left in MGNREGA coffers; 21 States in the red

The Centre’s flagship rural employment scheme has run out of funds halfway through the financial year, and supplementary budgetary allocations will not come to the rescue for at least another month when the next Parliamentary session begins.

October 30 will see bypolls across 11 States for three Lok Sabha and 29 Assembly seats that will have implications for the politics of each of these States.

Prime Minister Narendra Modi on Friday, October 29, 2021, held the first in-person meeting with his Italian counterpart Mario Draghi on the sidelines of the G20 Summit here during which the two leaders had extensive talks on diversifying the bilateral ties.

For Puneeth Rajkumar, this was no time to die

Puneeth Rajkumar, Kannada film actor who died on Friday sending shock waves across the State, was on screen most of his life as he made his debut when he was six months old. He had an emotional connect with the audience that was rare in a star-driven industry.

Ground Zero | The hunter gets captured by the game | Aryan Khan, Sameer Wankhede and a political slugfest

Following the arrest of superstar Shah Rukh Khan’s son in a drugs-related case, allegations of professional and personal impropriety have been made against Sameer Wankhede, the officer heading the investigation. Alok Deshpande reports on the events of the last three weeks which have grown into a political slugfest.

The number of agricultural labourers who died by suicide in 2020 was 18% higher than the previous year, according to the National Crime Records Bureau (NCRB) report released on Thursday. However, suicides among landowning farmers dropped slightly during the pandemic year.

Officials entrusted with the safekeeping of workers’ retirement corpus worth lakhs of crores have been found to be working on the side to further private employers’ interests instead, in a blatant and widespread violation of civil services rules in PF offices across the country.

The Delhi High Court on Friday asked Twitter to remove certain objectionable tweets relating to Hindu Goddess from its platform, observing that the social media giant should respect sentiments of general public as it was doing business for them.

The Registrar General of India (RGI) under the Union Home Ministry pulled down a document with the latest form of the National Population Register (NPR) from its website.

Pakistan beat Afghanistan by five wickets in their Group 2 Super 12 match of the ICC T20 World Cup here on Friday.

Assam sets Jan. 15 deadline to administer COVID-19 vaccine to all

The Assam Government has set January 15 as the deadline to complete COVID-19 vaccination of all the eligible population, estimated at 2.1 crore.