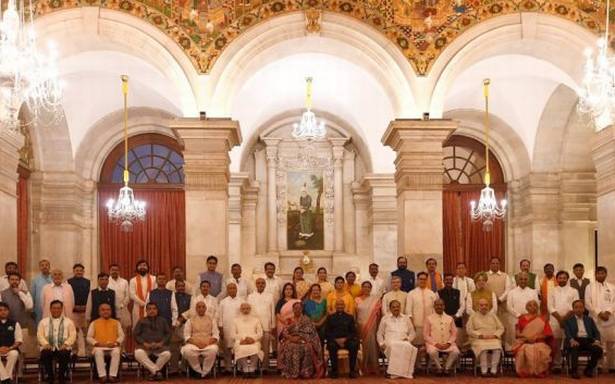 In a major shake up of his Council of Ministers almost midway through his second term, Prime Minister Narendra Modi oversaw the swearing-in of 43 Ministers (new and seven promotions to Cabinet rank) and dropped 12 Ministers (seven Cabinet and five Ministers of State) including Health Minister Harsh Vardhan on Wednesday.

Four militants were killed in two separate gunbattles with security forces in Kulgam and Pulwama districts of Jammu and Kashmir on Thursday, July 8, 2021, police said.

England won their first semi-final since the 1966 World Cup when Harry Kane’s extra-time goal, following up after his penalty had been saved, earned a 2-1 victory over Denmark on Wednesday that sent them into Sunday’s Euro 2020 final against Italy.

Haiti’s communications secretary says police have arrested the “presumed assassins” of President Jovenel Moïse. Frantz Exantus did not provide further details about the slaying of Moïse and the wounding of his wife on Wednesday, July 7, or say how many suspects had been arrested.

The massive redrawing of the government in Wednesday’s Cabinet expansion has the seeds of the political battle lines over which the 2024 elections will be fought.

In a rare diplomatic gesture, External Affairs Minister S. Jaishankar travelled to Tehran on Thursday, and called on Iranian President-elect Ebrahim Raisi, a month before he assumes office.

Former Finance Minister P. Chidambaram said on Wednesday that the resignation of Harsh Vardhan as the Health Minister during the Cabinet reshuffle is an admission that the Narendra Modi government had “utterly failed” in managing the corona pandemic.

The Biden administration reacted to the death of Father Stan Swamy in custody in India and called on all governments to respect the role of human rights activists.

Roger Federer crashed out of Wimbledon on Wednesday, losing to Poland’s Hubert Hurkacz in the quarterfinals, potentially bringing down the curtain on the Swiss legend’s All England Club career.

A container ship anchored in Dubai at one of the world’s largest ports caught fire late Wednesday, causing an explosion that sent tremors across the commercial hub of the United Arab Emirates, authorities said.

More than a month after the United States announced the donation of 80 million doses of American-made COVID vaccines to dozens of countries including India, and Vice-President Kamala Harris called Prime Minister Narendra Modi to convey the decision, the vaccines are being held up by regulatory issues over indemnity, Indian and U.S. officials confirmed.

Among the reasons that some of the 12 Ministers who resigned ahead of the Cabinet expansion on Wednesday cited for putting in their papers were health concerns as well as just “asked to do so”.