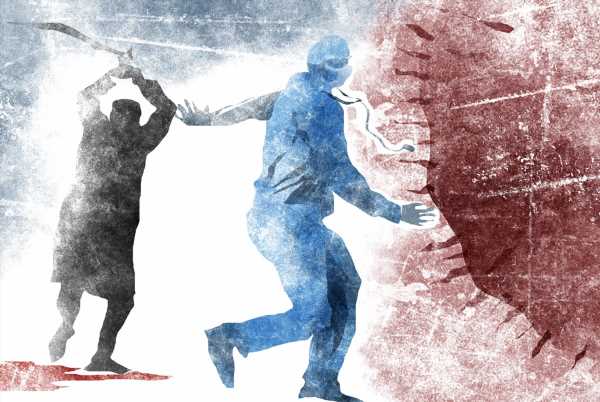 ‘But he doesn’t let me forget when he wins,’ Dr Sanjeeth Peter tells us in this fascinating multi-part diary of a Covid Warrior.

A peek into the Operating Room told me that the patient who we just operated on was fine — a 45-year-old male with a tight block in his left main coronary artery who presented with chest pain.

We opted to do an emergency beating heart CABG to save his life and his myocardium!

“Being shifted, no supports,” yelled the anesthetist. A nod and a quick tilt of my head signalled to my colleague, who had recently acquired his MCh, that I’m going on to my next task for the evening.

It was time to go to the COVID ICU!

Looking at the buzz and flurry of activity in the ICU, one would never imagine it to be 9:45 pm outside!

Indian Idol had started, the news channels had guests screaming at each other, a delicious Saturday family dinner had been served and it was time for dessert — that was the outside world!

I walked into the Covid ICU and here all the lights were on and various beeps of a different tone, pitch and frequency competed with each other to be heard.

Yet, above all this din, “Bed 12 – code blue” was all it took for half of the blue gowns to run towards a bed in the ICU.

Automatically, my feet took me there. 57-year-old Hemant* was gasping for breath. It was his 12th day with us.

We managed to keep his oxygen levels in an acceptable range. He had been on NIV for 2 days now, though clearly fighting to live. Yamaraj was hovering around!

When people ask me what I do for a living, I often tell them that I fight. My lean frame elicits a curious look with raised eyebrows for a response. I do fight — everyday. My fight is with Yamaraj. Most of the time I outsmart him, but he doesn’t let me forget when he wins.

Saturations were down — 60 per cent, he was gasping for breath, blood pressure falling, the beep in the monitor confirming that his heart beat was slowing.

I think of the conversation I had with his only son in Adelaide over a video call the previous evening. I told him his father had been holding on, but flashes of breathlessness with drop in saturations had us worried.

He asked the right questions. A bright kid, I thought. He broke down when I asked him if I have his permission to escalate therapy to invasive ventilation if necessary. He had said, ‘Doc, I don’t know. You take the decision for me. You do what is best for him. I don’t want him to suffer.’

When I looked around, everything was ready.

The blue gowns each had an intubation set, Ambu bag, Ventilatory tubing and one was busy jabbing the touch screen furiously to make sure the ventilator will deliver the right amount of breath at the right frequency with the right pressure and the right concentration of Oxygen.

It was then that I realised that 6 face shields were staring at me questioningly — do we intubate him? It was my call!

‘Call his son. Quickly. Video call.’ I yelled. It was well past midnight for him. In 10 seconds I asked if I had his permission to intubate his father. Sobbing, he said, ‘Your call, Doc!’

For an answer, I clicked my fingers and pointed to the ventilator.

Seeing me walk up to the head end of the patient, the others went about doing their pre assigned jobs with surgical precision. The drugs to sedate and paralyse him were loaded, intubating scopes were checked, Size 8 endotracheal tube opened, connectors, syringes, readied and the ventilator came alive with a loud hiss – as if to say it understood the situation too and was ready for it.

‘Be calm’ is a ludicrous thing to say to a person who is at the threshold of life and the after life. Just as I said, ‘We’re giving you an injection which will make you fall asleep’, I realised that I was speaking to a limp body.

The ‘experienced’ was also assigned to ensure safety of all those participating in the procedure. There was no treatment for HIV then as the case today with Covid-19. So, here I was, almost 30 years after having removed the appendix of an HIV patient, identified again as the ‘experienced’ hand.

With the mask, face shield and the vaccine as protection, I inserted the laryngoscope into Hemant’s mouth and slid the tube through the vocal cords into the trachea making sure no one else peered in to have a glimpse of the virus that has destroyed life as we know it. Only I had that privilege!

If Hemant could pass on his virus to anyone — it had to be me, but being an ‘experienced’ hand, I ought to know how to prevent this from happening.

Tubes connected, filters in place, air gushing into the lungs and the result was miraculous. The frequency of the beep was steadily increasing along with its tone, indicating that the heart rate was picking up and the saturation was climbing.

No words spoken, we all watched in awe, and I wondered at advances in medicine.

The next few minutes were spent tidying up and I left the bed side, picked up the ICU tablet to call his son. Pausing at the foot end of the bed pouring over his chart before calling, I couldn’t help but notice that Hemant was alone now — just the ventilator unfailing in its job to ensure he gets his breath and wires connected to a monitor displaying multiple waves each in a different cheerful colour indicating his vital parameters which would help decide further course of action in his treatment.

The tiny 20-something nurse next to him was the only living company he had. She and, of course, the virus!

He was a stranger to us 12 days earlier and today we were all he had for family. We had risked our lives (and that of our own loved ones) to bravely stand between him and the deathly blows of the pandemic. It had better be worth the risk.

Human lives were at stake. Our fight was far from over, in fact it was just beginning.

Hemant’s son was waiting for the call. ‘I feel so far away’ were the only words he could muster. ‘Thank you for being with him’.

Never had I thought that I would discuss a ‘life and death’ situation over the phone with the next of kin and a video call for the purpose was certainly a first for me.

I instantly travelled back in time to one of the occasions I had when I called on the land line to update a patient’s relative while I was working in the cardiac surgery Unit in Melbourne.

In a flat tone I said that I was calling to inform him that his father has just had a bypass, was in the ICU and was doing well.

‘Oh, Good on you! I’m in Sydney and haven’t seen the old bloke in a decade. Did he give you my number?’

‘Yes! I didn’t know … well…uhm… your …situation. As a matter of fact he asked that you be informed after the surgery.’

‘That’s fine maite! Thanks for calling! I’ll send him a bunch of flowers.’

Since then, back in India, all updates had been in person, most often to at least a dozen curious relatives who could be classified in the range from ‘genuinely concerned and will not eat a morsel till I get news of him/her being out of danger’ to ‘finally got a chance to get out of the house, which is what explains my Sunday best dressing and a display of my finest jewellery freshly brought out of the locker’.

Flash forward to the present and it struck me again that Covid had indeed changed everything — especially the way we communicate.

Dr Sanjeeth Peter, a cardiac surgeon with 25 years of experience in critical care, is the director and chief cardiac surgeon at the DDMM Heart Institute, Nadiad, Gujarat. He is a volunteer helping care of COVID-19 patients.

Monday: ‘Remember Yamaraj attacks us even more when we’re down’