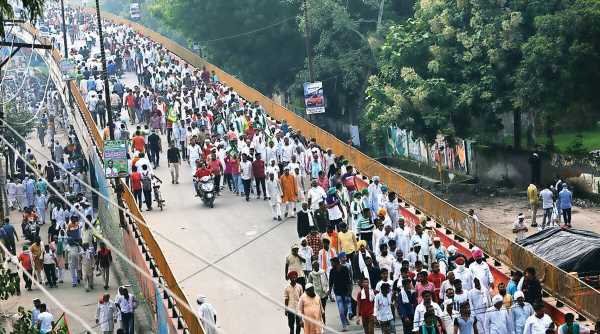 On Sunday, clues to the positioning of the parties could be found in the contradictions among the sea of people, away from the sprawling stage in Muzaffarnagar's Government Inter College ground. THE MEERUT Expressway on Sunday had banners put up by Akhilesh Yadav’s Samajwadi Party and Jayant Chaudhary’s Rashtriya Lok Dal, greeting “farmer brothers” to the Muzaffarnagar Mahapanchayat, billed as an event that could reshape the region’s political dynamics.

The ones put up by Congress, however, featured a gleaming Priyanka Gandhi, still wishing the people of the region on the occasion of Independence Day. BJP banners, meanwhile, congratulated Muzaffarnagar MP Sanjeev Balyan for ensuring a “landslide victory in the panchayat polls”, a message that seeks to reinforce the party’s aura of electoral invincibility.

On Sunday, clues to the positioning of the parties could be found in the contradictions among the sea of people, away from the sprawling stage in Muzaffarnagar’s Government Inter College ground.

The RLD’s push to reclaim its stronghold will meet success, said Mayank Chaudhary, 21, clicking away selfies in front of an RLD banner. Tejpal Singh, 62, however, sought to offer a nuanced take.

“Chaudhary saheb (late Ajit Singh) had lost as the khap (clan) of the Tikaits had betrayed him. Now they have realised their mistake. Our Malik khap stood by them despite our past differences. Otherwise, Tikait would have been behind bars under NSA. We are united this time,” Singh said, pointing out how thousands of jat farmers had responded to the call of Rakesh Tikait on January 28 when the administration had directed that the Ghazipur protest site be cleared.

The GIC ground, which can fit at least two football fields, was full. People spilled over outside the ground. Every road, lane, alley had groups of farmers, either marching, or resting.

The RLD and SP offered logistical support, including community kitchens.

Around 10 am, the day’s speeches began as khap panchayat and farmer leaders began addressing the people. In his speech, Tikait referred to the event, saying it brought “people together”.

The stress on Hindu-Muslim unity, which lay shattered after the 2013 riots, found mention in almost every speech from the stage, with Tikait invoking the slogan “Allah Hu Akbar, Har Har Mahadev”, which he said, was popular during the time of his father, the legendary Mahendra Singh Tikait.

But on the ground, the voices were diffident, the expectations modest.

“One cannot ever forget that the riots had started after one such mahapanchayat in the area. But the situation has improved now. Our people have returned to the villages in many areas,” said Aas Mohammed, 40, a small farmer. The line that follows – “jo bhi hai unke man mai hai, humare man nai nahi” – indicated that the chasm may have narrowed, but hasn’t disappeared yet.

But Nooruddin (21), a resident of the town, sounded more upbeat. “I was a kid when the clashes took place. But it’s not the same anymore. I have so many Hindu friends,” he said, flaunting a BKU cap.

And there were those who offered takes that might partly explain where the BJP’s confidence stemmed from. “UP under Yogiji (CM Adityanath) is a better place in terms of law and order,” said Virendra, a Dalit marginal farmer from Mau. “I have no qualms in admitting that the state saw only dabangai under the SP. Now policing has improved. SP has only itself to blame for its situation.”

Kunwar Lal, 60, from Kanpur Dehat, said he has been giving his vote to the BJP since 2014. “Even now I believe (PM Narendra) Modi is our best bet. I don’t like Yogi though,” said the resident of Akbarpur in Kanpur Dehat.

Their views were a far cry from the speeches from the dais that called for the ouster of “Modi, Yogi and Shah” under the morcha’s Mission UP, which has the stated objective of taking the farmers movement against the three farm laws “to every village of UP, to strengthen it the way it has happened in Punjab and Haryana”.

“All said and done, the mahapanchayat will help polish the image of Rakesh Tikait in his turf. But if he can make a political pitch, campaign against the BJP in West Bengal, why was our leader Gurnam Singh Chaduni sidelined for proposing that the farmers must hold the levers of political power in Punjab?” asked Sandeep Kumar, a jat from Haryana.