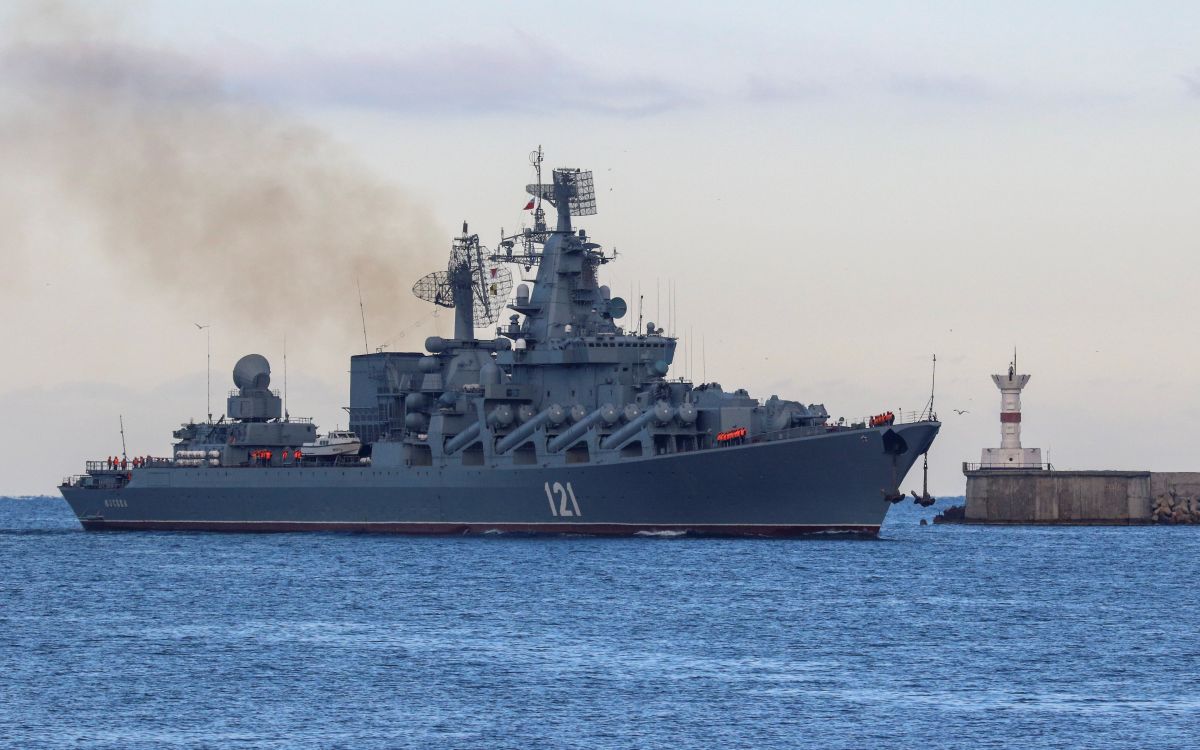 The symbolism of the sinking of a major naval ship is deeply complex and military history is replete with tales of how the loss of a single high value war ship perhaps impacted the larger war that the nation in question was engaged in, points out Commodore Venugopal Menon (retd).

The sinking of the Russian navy’s Black Sea fleet flagship, Moskva, on Thursday, April 14, is a major setback for Russian President Vladimir Putin and the ill-advised war launched by Moscow against Ukraine on February 24.

The symbolism of the sinking of a major naval ship is deeply complex and military history is replete with tales of major naval battles and how the loss of a single high value war ship altered the dimension of that particular operation and perhaps impacted the larger war that the nation in question was engaged in.

The last major warship to sink was the Argentinian cruiser Belgrano during the Falklands war which was torpedoed by HMS Conqueror.

The sinking of the Moskva, whether due to a strike by a Ukrainian anti-ship missile R360 Neptune or a raging fire and the sympathetic explosion of ammunition, still remains a topic for discussion, This will remain a mystery with the ship somewhere deep in the Black Sea.

Many tactical lessons will be discussed by experts from the sinking of the Moskva when more credible information is available.

However, a preliminary analysis can reveal a wide range of scenarios that fit the narrative to the causes for its sinking.

Based on available open source information and photographs, I would depict the following scenarios.

It is important to examine the technical and tactical data of the missile at the outset.

Photographs available on the media are restricted to port side of the superstructure which is damaged considerably.

In addition, there is extensive damage on the port side hull near the waterline below the super structure.

Since the Neptune is a sea skimmer, the likelihood of the missile causing damage to the superstructure is very likely.

However it does not explain the damage to the hull near the waterline.

Hence, the missile hit causing a sympathetic explosion of ammunition leading to sinking the ship is unlikely considering the layout of magazines on a warship.

It may also be noted that only small quantities of ready use ammunition is generally stowed on the upper decks forward of the superstructure as a standard operating procedure.

Any explosion of ready use ammunition can only cause local damage which can be contained by the crew, Another point to note is that the quantity of warhead in a Neptune missile is only 150 kg and even a salvo of two missiles is grossly inadequate to sink a ship of the size of the Moskva.

This assumption is based on the premise that the Neptune missiles stuck the ship at the bridge and CIC which practically made the ship ‘Not under Command’.

Thereafter, a torpedo attack by a lurking submarine would have followed to seal the ship s fate to dispatch her to Davy Jones’s locker.

It is a possibility which cannot be ruled out as the extensive damage on the port side hull below the super structure near the waterline could be attributed to the torpedo attack which caused the ship to subsequently list heavily to port side prior to sinking.

An effective coordination by a long range maritime aircraft patrolling in the area providing target coordinates to the coast battery and the submarine is a distinct possibility.

This is not a figment of my imagination, but a proven naval tactic which cannot be ruled out.

The Russian claim that the sinking of the ship was caused by internal fire on board due to an accidental explosion is very unlikely considering the location of damage sustained by the ship as interpreted from the photographs and videos in circulation.

Moreover, crews on a warship are well trained to fight fires caused by accidents and the major fire fighting system covers all compartments in a ship.

In addition, the main system is backed by secondary systems in an emergency.

Following points are relevant in this analysis and merit attention.

The aim of this column has been to analyse the possible causes for the sinking of the biggest naval ship since World War II from different angles and available information.

Assumptions have been made to build different scenarios for a meaningful analysis.

It is very unlikely that the truth would emerge even if the Russian navy conducts a thorough investigation into the possible causes for the sinking of their flag ship.

Submarines are silent warriors at sea and their deployment, success or kills will always remain a closely guarded secret and in this case the nationality of the boat too (based on assumption).

This aspect has not been highlighted in any of the analysis on the subject in the media thus far and rightly so as the realms of underwater warfare will always remain a mystery.

Commodore Venugopal Menon served in the Indian Navy for 29 years in operational roles, including commands at sea, and training and staff assignments at Naval HQ.
In addition to the staff and war courses in the Indian Navy, he underwent the executive course at the Asia Pacific Centre for Security Studies, Honolulu.