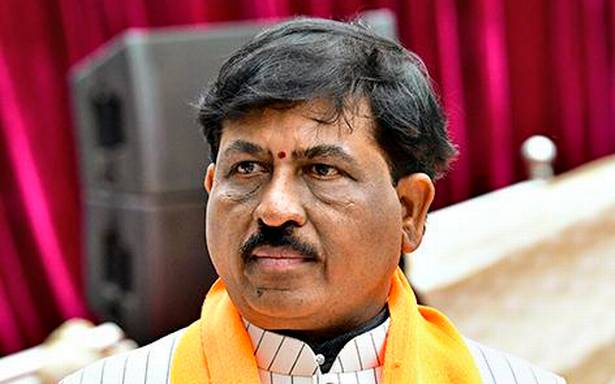 The decision on privatisation of State-owned Mysugar in Mandya will be taken by the Chief Minister, even as Industries Minister Murugesh R. Nirani announced that his family-owned Nirani Sugars would not participate in the bid to take control of the now shut factory.

On a day when the sugar politics of Mandya reached the Legislative Council, Mr. Nirani also announced that he would hand over the control of Pandavapura Sugars factory in Mandya district.

Currently, farmers are protesting in Mandya against the government’s move to privatise Mysugar. Recently, the former Chief Minister H.D. Kumaraswamy had aired his opposition to the privatisation move.

Mr. Nirani, whose family owns nine sugar factories with a crushing capacity of 72,000 tonnes a day, has been facing opposition from a section of farmers in Mandya after Nirani Sugars took over the Pandavapura factory.

“200% I will not bid for Mysugar. Despite investing ₹50 crore without the lease document and spending months to restart Pandavapura Sugars, I have been blamed for taking over the defunct mill. I have decided to hand over the factory to the old management by the end of this crushing season,” he announced on the floor of the Council while participating in the discussion on privatisation of Mysugar on Tuesday. The Chief Minister would take a decision on Mysugar after convening a meeting of farmers and political representatives from Mandya, he added.

Earlier, questioning the rationale to privatise Asia’s first sugar mill started in 1933 by the erstwhile rulers of Mysuru, Janata Dal (Secular) member K.T. Srikante Gowda said Mysugar had been ailing for the last two decades as the government deputed 29 managing directors to run the factory. “When the factory with modern machinery is ready to run, what is the benefit of privatisation,” he sought to know. He said the co-generation plant with a capacity of 28 MW had not even started working, and the total value of the factory’s property was about ₹2,000 crore.

Leader of the Opposition S.R. Patil asked the reason for privatisation when the factory was viable.

Acknowledging that the factory offered good opportunities as it had the latest technology, Mr. Nirani said, “Give me 15 days, I will ensure crushing of 5,000 tonnes a day. So far, the factory has not crushed more than 3,000 tonnes a day,” he said. He added that many sugar factories were “in coma” and would soon be auctioned off. “Even after the government spending ₹520 crore, the factory was unable to utilise facilities. Why should we not privatise,” he asked.

In response, the Opposition members urged him to become the chairman of the factory and use his experience to turn it around.