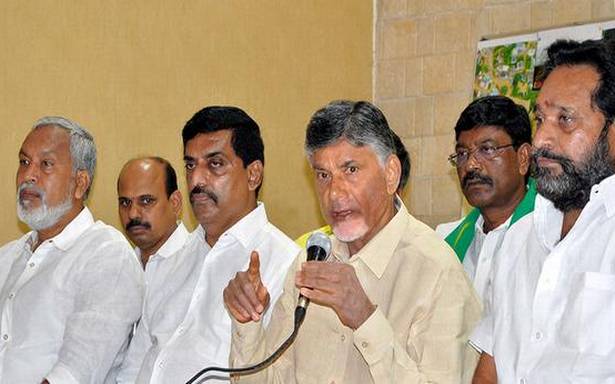 ‘Govt. failed to act as per disaster manual’

Asserting that the disaster caused by the flood in the Rayalaseema districts was a man-made one, TDP national president and former Chief Minister N. Chandrababu Naidu on Thursday demanded that a judicial probe be done into the entire episode to fix accountability.

“The loss of nearly 60 lives in rain-related incidents is the result of apathy, selfishness and arrogance of the government,” he told the media, while winding up his tour of the flood-hit areas in Chittoor and Kadapa districts.

Referring to the flood triggered by the breaches developed in the Pincha and Annamayya projects, Mr. Naidu blamed the YSRCP leaders, alleging that the ruling party was hand-in-glove with the sand mafia.

“Water was not released from these projects in time to safeguard the interests of the sand mafia and this led to the disaster, “ he said, adding that the Irrigation Department failed in maintenance of its assets such as reservoirs and projects.

“There is a disaster manual on preventive measures during flood situation such as alerting the public in time, shifting people to relief camps, providing immediate rehabilitation and estimating the quantum of compensation. Notwithstanding the heavy rains, the YSRCP government failed on all fronts,” said Mr. Naidu.

Blaming the government for the loss of life and property, he said many villages were washed away and innocent lives were lost for no reason.

The TDP president recollected how his government had acted during the Hudhud and Titli cyclones and checked the number of deaths to less than 20. Mr. Naidu said that he would write to the Chief Secretary soon on this issue.

Special Correspondent in NELLORE adds: Mr. Naidu accused the Chief Minister of shirking his responsibility when it came to extending aid to the flood victims. Touring some of flood-hit areas in Naidupet, Gudur and Indukurpet mandals, he said the Chief Minister washed his hands off relief measures by making an aerial survey.

Opining that excessive sand mining downstream of Somasila reservoir was responsible for the flood fury, he said the TDP would fight for enhanced input subsidy for farmers who had lost their crops. He alleged that the YSRCP, which came to power promising prohibition, was boosting its revenue through liquor sale .