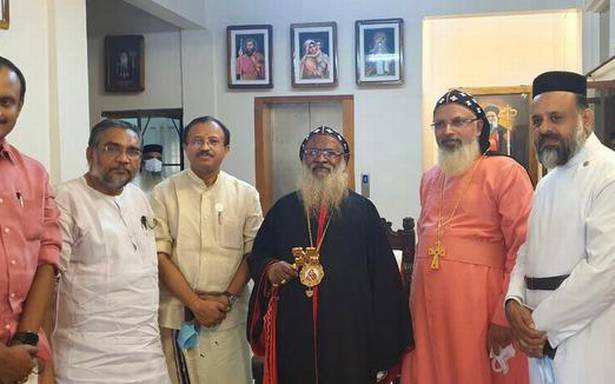 Amidst reports of a souring relationship between the Catholic Church and the Bharatiya Janata Party (BJP) over the recent attacks on members of the Christian community in Karnataka, Union Minister of State for External Affairs and BJP leader V. Muraleedharan on Monday said the Narendra Modi government was not anti-Christian.

Speaking at a function in connection with the 150th death anniversary of St. Chavara Kuriakose Elias in Mannanam on Monday, Mr. Muraleedharan pointed out that the invitation extended by Mr. Modi to Pope Francis to visit India was part of the Central government’s commitment to the Church. Similarly, the Union government has postponed the release of the final notification of the K. Kasturirangan report in view of the concerns raised by Church leaders.

“It is so unfortunate that attempts are being made to portray the Modi government as anti-Christian by citing certain isolated incidents and exaggerating fake news,” he noted.

Regarding the Missionaries of Charity, the Union Minister said that a clarification by the agency that its bank account was not frozen by the Central government but by the agency itself was never taken seriously. “There are attempts to exaggerate even local issues and make the Narendra Modi responsible for everything,” he added.

On the occasion, the Minister announced that the Department of Culture under the Union government had already begun works on elevating the St. Chavara Kuriakos Elias Pilgrimage Centre at Mannanam in Kottayam to the status of a nationally recognised cultural centre. Based on a request from the Church leadership, the Union Minister of Culture has been briefed about the matter, he said.