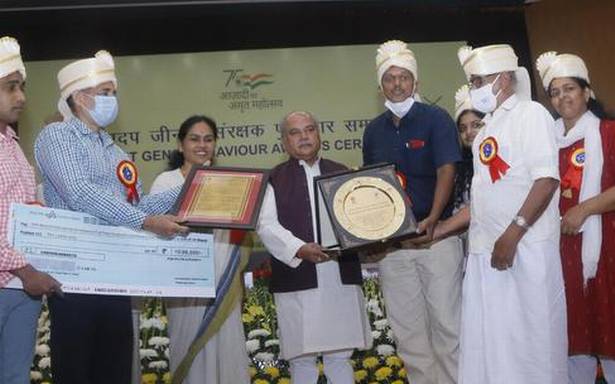 The group is also sharing grafted plants to various government organisations, including educational institutions, throughout the State for further conservation of local mango varieties.

Their conservation activity has led to the declaration of Kannapuram, a panchayat about 15 km from Kannur town, as ‘Indigenous Mango Heritage Area’ on July 22, 2020.

The Nattu Manchottil group received ₹10 lakh as purse, citation and memento from the PPV&FRA. The group was nominated by the IPR cell, Kerala Agricultural University.

Satyanarayana Beleri, a farmer-turned-paddy conservator of Bellur, a small, quaint hamlet located in Kasaragod district, nominated by the IPR cell, won the Plant Genome Savoir Farmer Reward for the year 2018-19 given by the PPV&FRA. Mr. Beleri received ₹1.50 lakh, a citation and memento. He has conserved as many as 204 rice varieties in an area of 200 sq.m.

Besides conservation, he shares germplasms with important research institutes, agricultural universities and farmers.