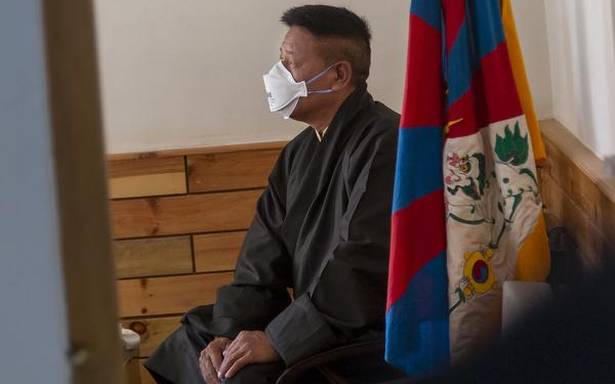 The new president of the Tibetan exile government said Thursday he was willing to reach out to the Chinese government to resolve their conflict, though the sides haven’t had dialogue in more than a decade.

Penpa Tsering, the former speaker of Tibet’s parliament-in-exile, was sworn in as president at a ceremony in Dharmsala, the northern Indian town where Buddhist spiritual leader the Dalai Lama has been living since he fled Tibet after a failed uprising against Chinese rule in 1959.

The Dalai Lama participated virtually in the ceremony from his residence and spoke briefly.

China denies curbing religion in Tibet and says the Himalayan region governed by the its Communist Part since 1951 has been Chinese territory since the mid-13th century. Many Tibetans say they were effectively independent for most of their history, and that the Chinese government wants to exploit the resource-rich region while crushing its cultural identity.

China doesn’t recognize the Tibetan government-in-exile and hasn’t held any dialogue with representatives of the Dalai Lama since 2010. India considers Tibet as part of China, though it hosts the Tibetan exiles.

Penpa Tsering said a Chinese “white paper,” or policy document, issued May 21 had nothing new on Tibet. "All I can say is we are open to send people to verify the facts that they have claimed in the white paper.

"At the same time, we have always been very consistent in our position that we are willing to reach out to the Chinese government to resolve the Sino-Tibetan conflict,” he told reporters.

Some Tibetan groups advocate independence for Tibet, since little progress has been made in talks with China.

The election held in two rounds in January and April was the third direct election of the Tibetan exile leadership since the Dalai Lama withdrew from any political role in the running of the exile government in 2011. Nearly 64,000 Tibetans living in exile in India, Nepal, North America, Europe, Australia and elsewhere voted.

Penpa Tsering, 53, was elected to its parliament in 1996 and became its speaker in 2008. He succeeded Lobsang Sangay, who completed his second five-year term.