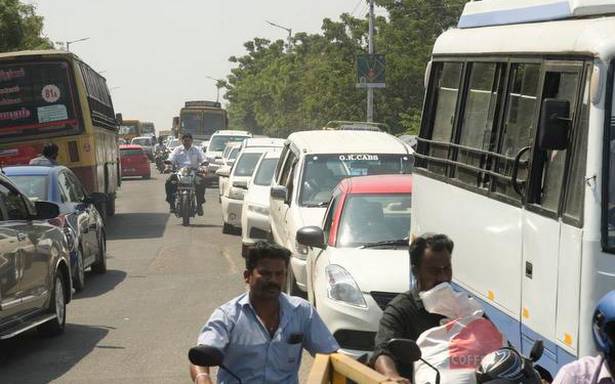 Amid recurring instances of accidents being reported within its limits, the Tiruchi City Police have identified nine spots falling under its jurisdiction where accidents were found to be frequent prompting the law enforcers to initiate necessary measures to curb them. The nine ‘black spots’ were identified after carefully examining the data pertaining to accidents reported within the city limits in the last three to four years.

Having identified the accident-prone spots after analysing the data, the City Police has initiated some measures including conducting vehicle checks and increasing the presence of police personnel at the chosen locations to curb accidents, said Deputy Commissioner of Police (Crime and Traffic) R. Mutharasu.

The City Police had narrowed down on the ‘black spots’ by examining accident -related data in the last three to four years, Mr. Mutharasu added.

In an effort to curtail the accident rate at these spots, the law enforcers were also initiating other measures such as putting in place barricades, provision of lighting facility and carrying road engineering where ever required besides installing blinker signals and caution boards to alert motorists, Mr. Mutharasu further said.

The city has witnessed a proliferation of residential localities and also a burgeoning vehicle density over the years posing a challenge to traffic managers. Vehicles coming into the city from surrounding villages and neighbouring towns and heading back have also increased over the years.

Lack of adherence to road rules by many motorists, sudden crossing and other factors have all contributed to road accidents, say police sources.

According to police statistics, the total number of fatal accident cases and casualties reported during the period from January to August in 2019 and 2020 were 216 and 223 respectively. In 2021 alone up to August, the city witnessed 60 fatal accident cases with equal number of deaths. The fatalities, however, had reduced in 2021 and 2020 during the period from January to August as compared to the corresponding period in 2019 when the number of deaths had exceeded 100.

Based on analysis of the data, police sources say accidents were found to be reported more between 9 a.m. and 12 noon and between 6 p.m. and 9 p.m. within the city limits. Two-wheelers getting involved in accidents were more in numbers as per the data, say the sources.

Since drunk driving could also lead to road accidents, the police say they have cracked the whip against those found driving under inebriated conditions. As many as 2,695 drunk driving cases had been booked from January to August in 2021 with every violator being slapped with a fine of ₹1,000. Drunk driving cases booked in 2021 (from January to August ) were more as compared to the corresponding periods in 2020 and 2019 when the cases booked under this head were 1,849 and 2,331 respectively.