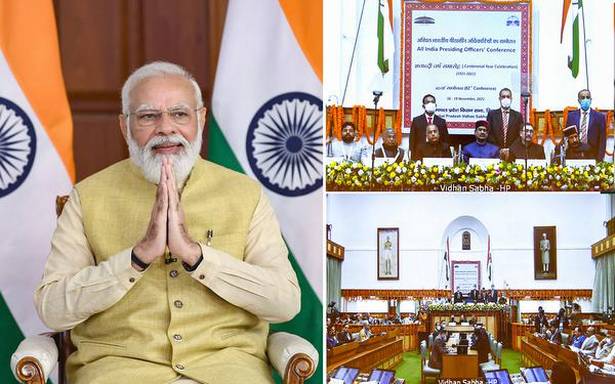 At Shimla meet, report on reviewing the anti-defection law was placed before the presiding officers

The All-India Presiding Officers’ Conference (AIPOC) ended here on Thursday with the delegates failing to reach a consensus on whether the Speaker’s powers under the anti-defection law should be limited, while reiterating an earlier resolution that there should be no disruptions during Question Hour and the President’s and Governor’s address to the House.

Lok Sabha Speaker Om Birla said the report of the committee headed by Rajasthan Speaker C.P. Joshi to review the anti-defection law was placed before the presiding officers, but there was no consensus.

The report would be discussed again in the future, he said. The committee was formed in 2019 to examine the role of the Speaker in cases of disqualification on grounds of defection under the Tenth Schedule of the Constitution. Mr. Birla said on Monday at a press conference in Delhi that the presiding officers’ powers in matters of disqualification should be limited.

Earlier during the valedictory session held at the Himachal Pradesh Assembly, Mr. Birla said there was a need to increase the number of sittings of legislative bodies.

“We should try to make a definite action plan to increase the number of meetings of the legislatures so as to provide maximum time and opportunities to the members so that the people’s representatives can discuss the major issues of their State and country extensively,” Mr. Birla said.

He said presiding officers should evaluate the work of the committees once a year and make them more accountable to the people.

Mr. Birla said the tradition of Zero Hour should be started in all State legislatures to give members the chance to raise urgent matters pertaining to their constituencies.

Referring to the issue of increasing disruptions, the Speaker said the matter would be discussed with leaders of all political parties. He added that the work of creating a single platform for all legislatures would be done by 2022.

Prime Minister Narendra Modi had said in his speech to the conference on Wednesday that “one nation, one legislative platform” should be realised.

Among the resolutions passed during the conference was the resolve against disruptions during Question Hour and President’s and Governor’s Address.