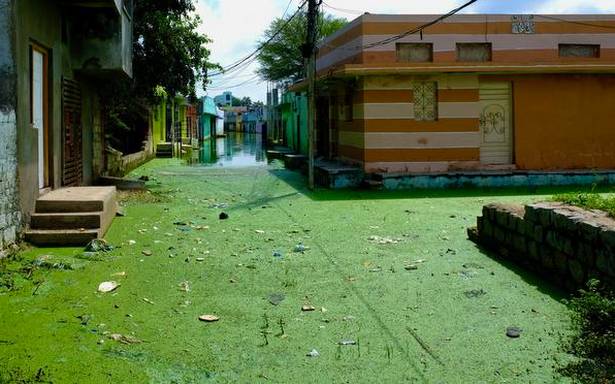 For the second year in a row, areas around the lake got flooded

Amer Arif navigates his autorickshaw slowly from his marooned house to the main road on the edge of Shukur Sagar lake. As the vehicle lurches from side-to-side, it appears as if it will tumble into the water but manages to reach high ground. The road is actually a duckweed covered water channel after the recent flooding.

“I start my day like this and repeat it in the evening. I have no choice as the rent here is ₹2,500. In other places, it is three times that,” says Mr. Arif, who has been living in the same house for three years. Last year, the family used a ladder to go in and out of the house after their courtyard remained under water for five months.

For the second year in a row, the residents of houses abutting the Shukur Sagar lake have been forced to move to the houses of their relatives or friends. For Mohammed Salahuddin and his family, it is as if the water was chasing him. “After the water receded last year, we changed doors. Repaired furniture. Bought beds but again the water rose and flooded our house. My family moved to my in-laws’ place in Al Jubail Colony. That house also got flooded. Now, I am living with my relatives at Saidabad,” says Mr. Salahuddin, who drives a cab for a living. The ownership of his house is marked by the cellphone number on its freshly painted wall.

Locked doors, scrawled cellphone numbers on walls and afternoon visits are the norm in the area. Rows of houses and streets have been deserted after the second round of flooding this year. “We barely make ends meet. This flooding and destruction have added to the cost. The government should build a 14-foot high embankment. Only then, we will feel safe,” says Mr. Arif.

This disquiet about the lake level has forced the police to mount a 24-hour vigil on the sluice gate and the embankment on the Venkatapur side. “We are afraid someone may do some mischief and that’s why this picket has been posted,” informs a police official guarding the entrance to the road to the temple on the embankment.

A few months back, an embankment was built on the western side to protect the localities but now the earthen work lies under water.

With the creation of the post of special commissioner (lakes), the residents living on the edge of the Shukur Sagar lake as well as other water bodies can see some action.