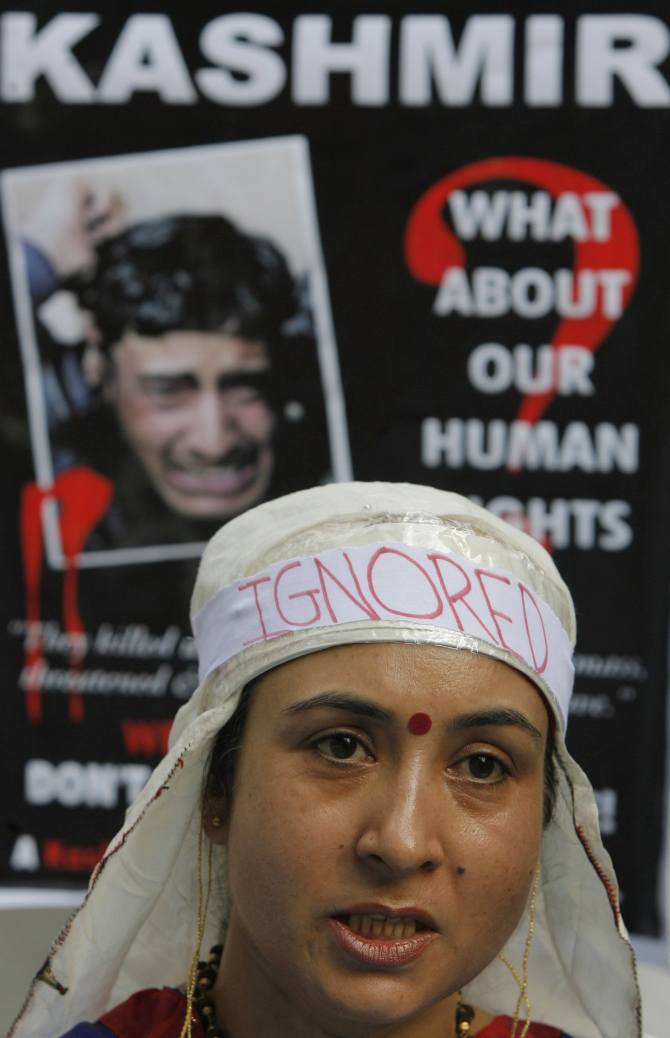 ‘No matter how many homes I own in Delhi, or any part of the world, as far as I am concerned, there is only one home and that is what was left in Kashmir in the 1990s.’

‘Over the past few years I have been seething with anger at the kind of ignorance, at the way we were neglected and our story being ignored.’

‘Whenever someone talks about our story he is immediately dubbed a Narendra Modi supporter, a very dangerous trend in this country.’

‘As long as you are talking about Adivasis in Bastar or the brutalisation of the State nobody raises an eyebrow. But the moment you talk about Kashmiri Pandits — after all, we were a religious minority in Kashmir — and how they being in a minority were targeted it doesn’t go down well and no one speaks about it.’

‘That is the saddest and most ironical aspect of this whole tragedy,’ Rahul Pandita, a Kashmiri Pandit and author of Our Moon Has Blood Clots, a book that chronicles the plight of his community in the strife-torn Kashmir Valley, tells Prasanna D Zore/Rediff.com

He is often labelled a Maoist for exposing the brutality of the State’s repression of the Adivasis in the name of development in Central India. But just like those tribals who are being uprooted from their homes and hearths Pandita, a Kashmiri Pandit, too was forced into exile by the violent Azaadi movement that gripped the state of Jammu & Kashmir in the late 1980s and early 1990s.

Compelled to live in exile by the circumstances that unfolded in the Kashmir Valley in the wake of the militant movement and the violence perpetrated in the name of Azaadi and religion against the Kashmiri Pandits, Pandita always wanted to chronicle the injustice his community and his family faced in Kashmir.

His wistfulness and anger took shape of the form of Our Moon Has Blood Clots, a riveting story of his family, his community, his people as seen from the eyes of a 14 year old who was old enough to figure out why the Kashmiri Pandits were subjected to insults, humiliation, torture and violence.

In an interview with Prasanna D Zore/Rediff.com, Pandita speaks extensively about his book, the emotional churn he underwent as violence grew in the valley in the 1990s, why the militants selectively targeted Kashmiri Pandits and the road ahead for a final solution.

What made your write a book that chronicles the hardships and exile faced by the Kashmiri Pandit?

I always wanted to write this book because it is about my own family, my own community and my own people whose story (of internal migration) was relegated to the margins for almost quarter of a century.

But I was not sure what form and shape it should take. There was a time when I wanted to write it as a fictional account because I felt that nobody was interested in our story. So I would rather write it in the form of a novel, write the truth but sugar-lace it in the form of fiction.

Meanwhile, years passed by and by the virtue of my full-time job as a journalist who reported widely from Bastar about the Maoists and came out with a couple of books on the subject… but somehow this book was lurking there in the backyard of my mind and I was very eager to return to it as soon as I could.

But also because of the fact that it was personal history I found it extremely difficult to write. In a way writing the book would have meant revisiting some of those very painful memories of those initial years in the exile after leaving our home and hearth and to be rendered homeless all of a sudden in a matter of few days.

There are certain episodes which I have mentioned in my book about the tragic, brutal murder of my brother, or my mother’s illness that happened later. In all it was a very difficult book to write.

I was also conscious of the fact that our story was not being told so far and for the past 25 years there has been this one kind of story which has come out from Kashmir Valley from which our story is completely missing.

So, I just wanted to strike out that balance, that other side of the coin which no one is interested in. It is not that people don’t know of it but usually the media and the liberal discourse of this country has ignored our story.

So, instead of waiting for someone else to do it for me I did it for myself, my people and I am glad I have come up with it.

It is written by Rahul Pandita the quintessential Kashmiri, who is rendered homeless at the age of 14.

It is essentially a memoir; it does not claim to be a historical document, which encompasses everything that has happened in Kashmir in the last 100 years.

No single book can do justice to the complete story of Kashmir. But, I am not making those claims. I say this book is a memoir of a Kashmiri Pandit who is rendered homeless.

But as far as the other events are concerned I was also aware of the fact that most of it has to come from my own memory and memory can be tricky at times. That is where I use my skills as a journalist; I checked everything; validated and re-validated all the facts from official documents, newspaper archives etc to make sure that whatever I write is 100 per cent accurate.

Every incident mentioned in the story from the 1986 communal riots which happened in Anantnag in South Kashmir or the way militancy erupted in Kashmir or the way the Kashmiri Pandits were selected one after another, all that is meticulously chronicled and written down with strict journalistic regimen.

Must Buy: Rahul Pandita’s Our Moon Has Blood Clots: The Exodus of the Kashmiri Pandits.