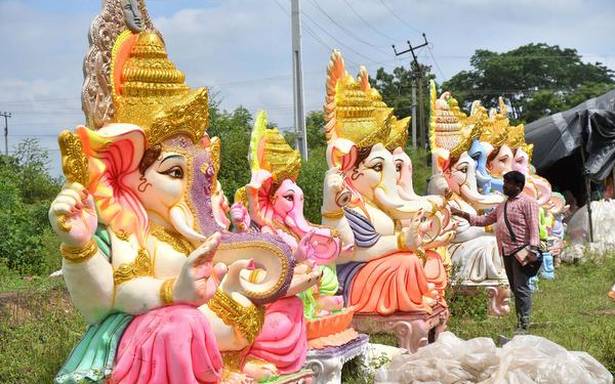 In an interim direction issued on Thursday that is likely to impact Ganesh festivities in the capital, Telangana High Court directed the State government to not permit immersion of Ganesh idols made of Plaster of Paris (PoP) in Hussain Sagar and other lakes.

A bench of Acting Chief Justice M.S. Ramachandra Rao and Justice T. Vinod Kumar also directed the government that Ganesh idol immersion should not be allowed from Tank Bund side in Hussain Sagar waters. The slew of instructions were announced by the bench after hearing a Contempt of Court matter arising out of a writ petition relating to environmental pollution due to immersion of idols in Hussain Sagar.

Idols made of PoP can be immersed in baby ponds already constructed by the Greater Hyderabad Municipal Corporation (GHMC) or separate places which would not allow passage of polluted water in the main water body of Hussain Sagar. “Government can explore use of inflatable rubber dam walls which were used while carrying out dredging operations earlier in Hussain Sagar by encircling area of immersion for idols,” the bench announced.

Making it clear that idols cannot be immersed from Tank Bund side, the bench said that idols (not made of PoP and not containing synthetic colors) can be immersed from Sanjeevaiah park and PV Ghat sides. The government agencies should encourage usage of low height and eco-friendly idols. They should persuade people to carry rituals in simple fashion without attracting huge crowds, it added.

Licenses should be limited to fixed number of pandals in respective areas by the local bodies. Officials must suggest to pandal organisers to switch over to online darshans or stream the celebrations through social medial platforms or local television networks, the bench said.

Citizens must be encouraged to organise immersion of idols at their homes by using a bucket filled with water. The bench instructed the GHMC to supply masks free of cost to people on the day of the grand finale of Ganesh idol immersion.

Hyderabad Police Commissioner should instruct his Station House Officers and Divisional Police Officers to ensure massive crowds are not gathered during the festivities. Police should fix the number of people to be present at a pandal at a particular time.

Playing of music loudly at the Ganesh pandals is strictly prohibited and use of loud speakers after 10 p.m. should not be permitted, the bench clarified.