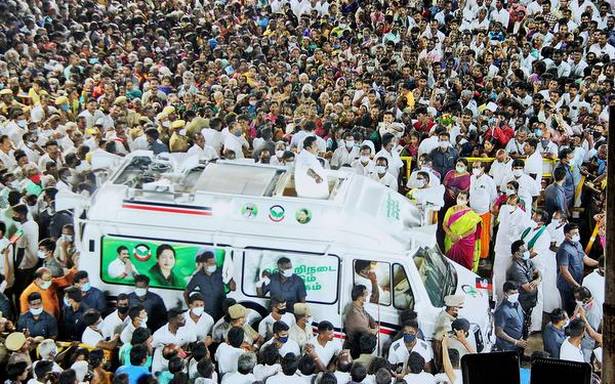 AIADMK co-coordinator and Chief Minister Edappadi K.Palaniswami on Sunday claimed that price inflation did not occur during his party’s regime and people from all walks of life are living peacefully.

Speaking at an election campaign at Kabilarmalai in Namakkal, Mr. Palaniswami said, “we ensured that inflation did not occur during our regime.”

He said that under Kudimaramathu scheme, the government rejuvenated 6,511 lakes at a tune of ₹1,417 crore.

Following requests from farmers, farm loans in co-operative banks have been waived and they are being provided with three-phase power supply.

Mr. Palaniswami said that due to good governance of the State government, spread of COVID-19 disease has been contained.

Criticising Opposition leader M.K. Stalin’s Ungal Thokuthiyil Stalin petition receiving programme, the Chief Minister said that Mr. Stalin is reminded of stage (Thinai) during elections. “DMK came to power five times and Stalin has served as Deputy Chief Minister and Local Administration Minister. Why was no action taken then?”, he said. “He did the same thing during 2019 elections, they collected petitions, but it was never given to me”, he said.

He questioned if the 38 MPs raised their voices to fulfil promises made during the elections. He said that he launched Chief Minister’s special grievance redressal scheme in 2019 itself.