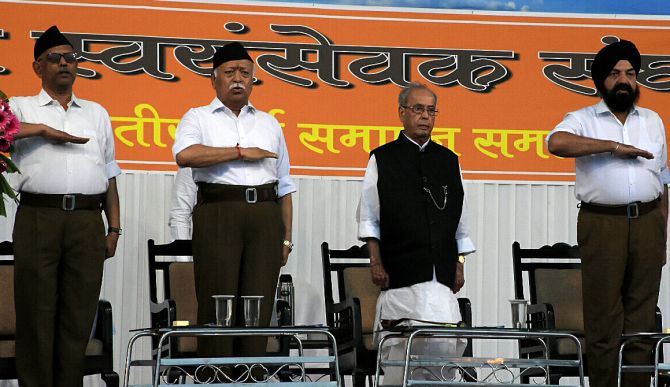 ‘There was a period when they questioned the flag and there were questions also against the Constitution.’
‘That’s long past.’

In his speeches at the three-day event, ‘Future fof Bharat: An RSS Perspective’, Rashtriya Swayamsevak Sangh Sarsanghchalak Mohan Bhagwat said the Sangh respects the Constitution and the Tricolour.

‘We respect all symbols of freedom, and the Constitution is also one such symbol,’ Bhagwat said.

This is in contrast with the stand the RSS took in the early years of the Republic.

Walter K Andersen, whose book The RSS: A View to the Inside highlights the change in RSS thinking over the years, says he hasn’t met a single swayamsevak so far who questions the Constitution or doesn’t respect the flag.

“The RSS as an organisation almost certainly, I think, supports honouring the symbols of the Indian nation,” Dr Andersen told Rediff.com‘s Utkarsh Mishra in the final segment of the interview.

With the rise of radical Hindu organisations like the Sanatan Sanstha, if the RSS continues to take such seemingly moderate views, does it risk forfeiting its more radical support base to such groups?

Oh, of course. Of course it does. And in fact organisations have crept up which have a kind of radical agenda like anti-beef.

Such organisations have propped up in Madhya Pradesh and West Bengal. They are not RSS affiliates, but they claim to be Hindu. And they have a kind of radical agenda when it comes to things like beef.

That obviously can be a problem for the government. This is one of most controversial issues that the RSS and the Government of India have to face.

The RSS has typically taken a law and order response to that. But that may not be enough. They have to go beyond law and order and build a mechanism to tackle the issue of the violence that comes up.

And I think of the case of the state of Goa, which has a BJP government.

Goa has created a group which has intelligence functions to find out where potential tension could be arising on one hand, and on the other, it is given some security resources as well.

I think that is necessary. In fact, that also stems from the Supreme Court guidelines to states (on the issue).

So I think on that one has to go beyond law and order and do the sorts of things the state of Goa has done.

On the issue of violence by cow vigilantes against the minorities and Dalits, the RSS does precious little apart from meek condemnation. Shouldn’t it do more? With such a large following as it has, surely it can launch a campaign against vigilantism.

They should do more, I agree with you on that. There are some (within the RSS family) who do.

I can take the name of Tarun Vijay, former editor of (the RSS weekly) Panchajanya, who has actually had a kind of campaign for Dalits to get entry into temples.

And you know that he was attacked several months ago for doing so. But he continues to be a leading advocate of that, he’s very faithful to the cause.

I think there was a certain fear that there will be a public backlash if they would do that. In my personal view, I think they need to do more on that (issue).

More people should stand up. More people need to be like Tarun Vijay.

The RSS did not hoist the national flag at its headquarters for 52 years after Independence. It always portrayed itself as a patriotic organisation but also maintained that the government cannot decide its patriotism.
In contrast, the government today, which has so many former pracharaks, is imposing patriotism on other people, like asking madrassas to provide video evidence of Independence Day celebrations.

That’s interesting, you are right. There was a period when they questioned the flag and there were questions also against the Constitution. That’s long past.

As far as I know, no one questions that in the RSS anymore. I met thousands of swayamsevaks during my research and I don’t recall a single person questioning the validity of the flag.

In fact, quite the contrary, it is seen as a national symbol of importance.

It’s interesting to talk of the issue, but it is not a live issue anymore.

Is it the case with the Constitution too?

Yes. I haven’t heard anyone say in the last few years that the Constitution or the flag are irrelevant.

In fact the reverse, there is a growing sentiment in favour of both.

Should the RSS ask the government not to force patriotism on other people?

I’m trying to think if there are any resolutions (regarding this).

I know of the problems at JNU (Jawaharlal Nehru University), there was some talk about how to demonstrate your loyalty to the Indian nation, whether saying ‘Bharat Mata Ki Jai’ was important etc.

There’s a difference of opinion, however, within the RSS on imposing (those things).

For many, as in the United States too, the idea of patriotism involves honouring the flag and singing the anthem.

The RSS as an organisation almost certainly, I think, supports honouring the symbols of the Indian nation. But this is not the core of what they are trying to do.

I mentioned before that Hinduism seems to have many meanings and it does, what seems to run through all of them, though, is a kind of notion of patriotism.

So many RSS affiliates are involved in welfare programmes for tribals and the depressed classes. What challenge does it pose to other, mostly Left-leaning, organisations indulged in similar work

The most obvious case is that of schools. There are Christian schools, there are madrassas, the RSS itself has its own schools.

You have Ekal Vidyalayas, which are kind of one-classroom schools that focus on tribal areas.

I am not aware that they (the RSS schools) get special benefits. They might, I can’t say.

They may not get special treatment but others may face discrimination. Recently, several Left-leaning activists were arrested. Is this a form of official discrimination against such groups?

There’s no (such) official policy of the RSS that I am aware of, except on the issue of conversion.

Hinduism as a religion is not a converting religion, even though there are groups that engage in ghar wapsi.

I am not sure if (there is discrimination) on an ideological basis, except in the case of Maosists who indulge in violence. But then it becomes a law and order issue.

When it comes to education and welfare work in tribal areas, I haven’t seen the RSS come out against it whether (during the rule of) this government, or previous governments.

If you run a Christian school in India, you get government support though you have to abide by certain regulations. And I am not aware of any actions taken against that (by this government).

Now in some states of India there are anti-conversion rules, but they go back, by and large, to the time of the Congress.

So in certain areas there’s a kind of consensus that conversion is not a good thing, and that fits into the larger scheme of what Hinduism is about.

But they haven’t pushed that issue in the north east, which has a large Christian minority. And they now control six of the seven states.

Can you imagine 10 years ago anyone saying that the BJP would control most of the states in north eastern India? I would have said (to such a person) that you are smoking something that is affecting your brain.

But it now does. And in fact it is the fastest growing area for the RSS.

Now why has it been able to do that in an area that is so heavily Christian and tribal? Christians and tribals eat beef.

They have not put the beef issue in the north east. They do it in Gujarat, Madhya Pradesh, but not in the north east and in some parts of the south. Because they realise that this is not a part of the cultural milieu in those areas.

Now that doesn’t mean there aren’t some people who are ready to take the law into their hands on the beef issue.

The problem is how to tackle them. And there again I say that they have to go beyond law and order.

How do you react to Congress President Rahul Gandhi comparing the RSS to the Muslim Brotherhood?

I was a little surprised at that tactic. It is a strategy that obviously was suggested to him by his campaign managers.

All the polling that I’ve seen indicates that economic issues are the most important. And, therefore, I would think that the focus would be on economic issues.

The polling also shows that these other kinds of issues are not uppermost in the voters’ minds.

Probably, my guess is they hope to sort of solidify support among Christians and Muslims by doing that. I’m not sure if that necessarily will.

I’m surprised, to be quite frank. Because this strategy is not the most effective.