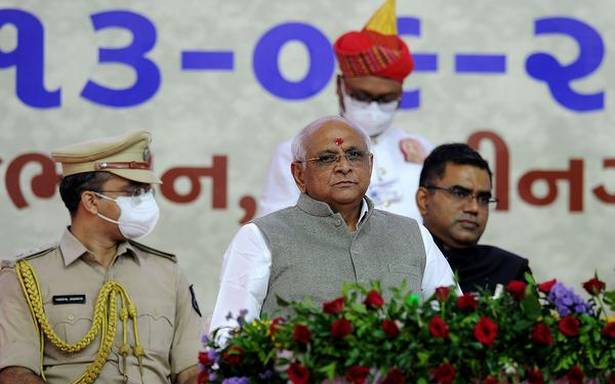 On a day when the Ahmedabad Municipal Corporation (AMC) decided to ban stalls selling non-vegetarian food along the main roads and within the 100-metre radius of schools and temples, Gujarat Chief Minister Bhupendra Patel stressed that the State was not bothered about what people ate, terming the drive a move against road encroachments.

Mr. Patel on Monday said the State Government had no problem with different food habits of people, an assertion coming amidst the demand for removal of non-vegetarian food carts from roads in various cities as the civic bodies had launched a drive against the food kiosks and carts.

According to Mr. Patel, action can be taken against street food carts selling “unhygienic” food or if they are obstructing traffic on city roads.

“Some people eat vegetarian food, some eat non-vegetarian food. The BJP Government does not have any problem with it. There have been demands to remove particular carts or stalls from the road in order to clear encroachments,” the Chief Minister said reacting to the recent drive in various cities in the State.

The Chief Minister said the local bodies had freedom to take decisions on removing food carts if they hampered traffic on the roads.

Mr. Patel had to issue a clarification in the backdrop of local BJP leaders demanding removal of non-vegetarian food carts from roads in different cities of Gujarat as elected wings of various civic bodies have directed the street food vendors to remove their kiosks or stalls from the main roads.

On Monday, the Ahmedabad Municipal Corporation, ruled by the BJP, decided to remove non-vegetarian stalls from public roads and those operating 100 metres from schools and religious places.

Similar directives have been issued in other civic bodies such as Vadodara, Rajkot, Junagadh and Bhavnagar.