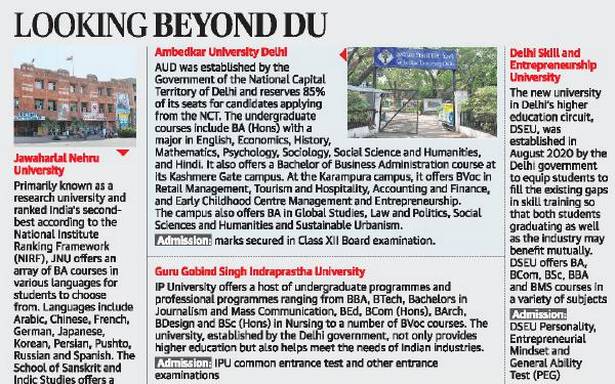 With the second cut-off list for Delhi University’s (DU) undergraduate courses giving little hope to candidates for securing a seat, the students who have not secured near-perfect scores are looking at options in other universities.

The Capital has several options in Central universities like Jawaharlal Nehru University, Jamia Millia Islamia and State universities like Ambedkar University Delhi (AUD), Indraprastha University and the recently opened Delhi Skill and Entrepreneurship University. They offer undergraduate courses through entrance tests and reservation for candidates from the Capital so that the sole criterion is not marks obtained in the Board examinations.

However, some aspirants have realised that they needed to have planned for their admission process in advance, by taking the entrance examinations that were conducted before DU’s admission season began.

‘Delay due to COVID’

Neha Solanki, who was hoping to pursue a BSc (Hons) at DU, says that her score is a little short of 80%. She adds that she needs to start looking at options outside the Capital. “Securing an UG seat in the Capital is like playing a game. You have to start early and be guided by someone who has played it before. Due to COIVD and delay in the Board examination results, this time the rules of the game have changed as it has been difficult to keep track of the admission process of various universities,” says Ms. Solanki.

While DU in its open house sessions for applicants said all its constituent colleges are of the same calibre, the National Institutional Ranking Framework, released by the Ministry of Education clearly puts one college above the other.

Punya Saluja, a parent, feels that the hype surrounding DU blinds students and does not let them explore avenues like professional courses, which could help them secure good jobs. “My daughter does not have a score above 90% and I have encouraged her to take up courses that will allow her to take up internships and build her CV to be job-ready. It better to give students options rather than make them believe that they have failed by not securing admission in DU,” Mr. Saluja says.

The Delhi Skill and Entrepreneurship University (DSEU) — which was started by the Delhi government in August 2020 — is gearing up for its first intake of students. It promises to produce students who will be job-ready to be absorbed into the industry with the skill they develop.

DSEU Vice-Chancellor Neharika Vohra says that the university has come up with an aptitude test that is not a part of the selection process to help applicants chose a degree that is related to their interests and make an informed choice.

“The DNA of DSEU is to encourage students to choose a degree that is related to their interests. Students have been asked to take an interest test to help them make a choice as to what they offer like job-linked degrees. Our effort is to help students find more about the industry and the probable jobs by getting many interviews from people who have done well in the field. Students have been asked to watch the videos on the same before making a choice. The key point is that we want the student to exercise agency in choosing their field of study,” says Prof Vohra.

At Ambedkar University Delhi, 85% of the seats are reserved for students from the Capital, giving them an edge over students competing to secure admission from other States. AUD, which is now over a decade old, is in expansion mode and providing an alternative to those students wanting to pursue the Arts.

At present, the National Testing Agency conducts the Central Universities Common Entrance Test (CU-CET) with 12 Central universities participating in it. Ahead of the admission process for DU, university officials had hinted that the CU-CET may be introduced this year but the university stuck to its regular cut-off method.

With Yogesh Singh taking over as the new Vice-Chancellor, candidates applying next year will have to wait and watch if Board examination results will be the only key to securing admission. Mr. Singh on his first day after taking charge as Vice-Chancellor said that he would communicate with all stakeholders of the university and would come to a decision if any reforms are needed in the admission process.