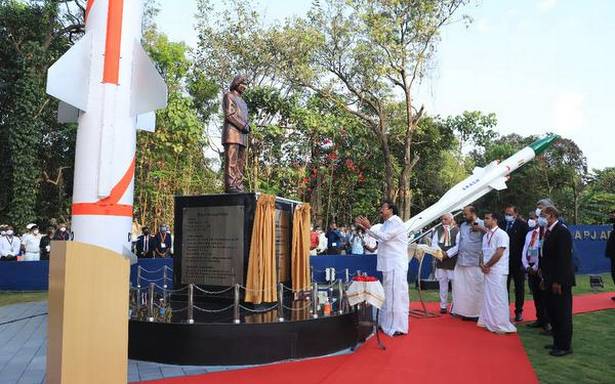 Vice President M. Venkaiah Naidu laid the foundation stone of the Towed Array Integration Facility that is being set up at Naval Physical and Oceanographic Laboratory (NPOL), the sole DRDO laboratory in Kerala, at Thrikkakara near here on Sunday.

He was the chief guest at a function that was arranged in connection with the Azadi Ka Amrit Mahotsav initiatives at NPOL. Once completed, it is slated to become a state-of-the-art integration facility for long length flexible sensor arrays and cables, says an official release.

The programme also witnessed the handing over of DHWANI acoustic trainer system developed by NPOL to the Indian Navy.

The licensing agreements for the technology transfer of USHUS series of submarine sonars were also handed over by Mr. Kamat to the Director (R&D) of Bharat Electronics.

An Azadi Ka Amrit Mahotsav installation – which portrays some of the exemplary Sonar achievements of NPOL, too was inaugurated by Mr. Naidu.

In his address, Mr. Naidu said that he was very happy to see that NPOL has established itself as a world leader in the niche area of underwater surveillance systems and technologies.While appreciating the practice of NPOL personnel working very closely with the Indian Navy, often choosing to sail with them to understand the complexities of Naval personnel while in the field, the Vice President said the organisation has been able to master a very complex and critical technology that gives a strategic edge to the Indian Navy in anti-submarine warfare.

Mr. Naidu will leave from the Naval airport here on board an IAF aircraft on Monday evening, after a four-day visit to Kerala and Lakshadweep.