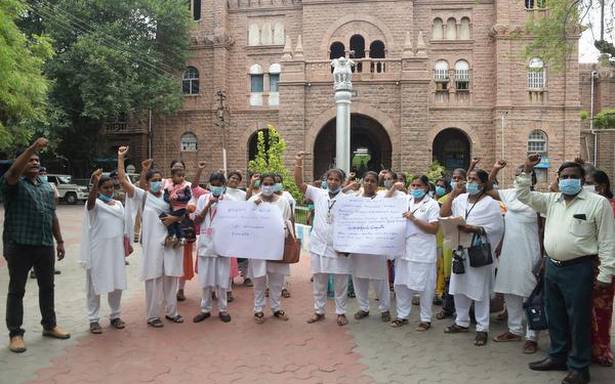 ‘Even after six years, we continue to hold temporary jobs’

Nurses recruited on contract through Medical Recruitment Board (MRB) from 2015 staged a protest at the Collectorate here on Tuesday demanding regularisation of their service.

It was part of a State-wide protest by around 12,000 nurses, said a press release. In Madurai, there are 400 nurses recruited by the Tamil Nadu MRB on consolidated pay, who are posted at the Government Rajaji Hospital, the Urban Primary Health Centres and PHCs.

Nurses from Dindigul, Theni, Sivaganga, Ramanathapuram, Tirunelveli also joined in solidarity of those from Chennai, Tiruchi and Coimbatore.

The protestors met Collector Aneesh Sekhar and submitted their charter of demands. He promised to take it up with the Chief Minister, Health Minister, and Secretary.

According to Ms. Raji, there are approximately 12,000 nurses on consolidated pay working across the State. After a protest in 2017, services of 2,000 nurses were regularised and another 1,200 were made permanent during the pandemic year. The rest were told to wait for vacancies and assured that opportunity would arise with the establishment of additional medical colleges.

“We have been repeatedly highlighting our demand and gone on hunger strike and protests,” she said. Earlier in January and again in March this year, the nurses had yet again raised their voice for permanent jobs, also in view of the fact that they were over-worked during the COVID-19 waves and yet their salaries were much less compared to the regular staff.