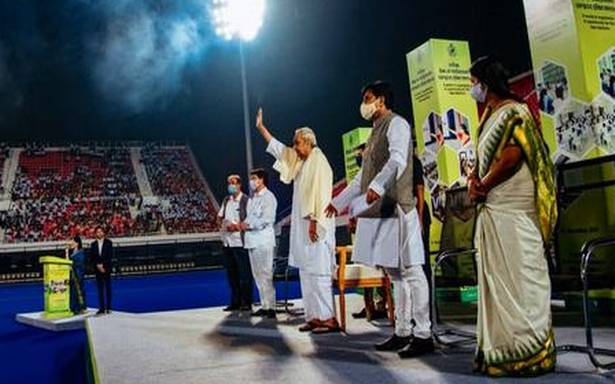 In the largest-ever recruitment executed at one go in Odisha’s history, the State Government handed out appointment letters to 6,131 teachers for high schools.

“Education is the collective hope and aspiration of a society. Teachers are central to the education system. Teachers will perform their duty for building the future generation and transforming the new Odisha,” said Chief Minister Naveen Patnaik on Thursday.

All the newly recruited teachers were brought to Kalinga Stadium for distribution of appointment letters. This is an all-time record in State’s recruitment history.

“Under 5-T transformation programme, the Government is renovating existing school infrastructure including library, classroom, laboratory and playground. As of now, 1,075 schools have been transformed. Facelift of all Government and aided schools will be taken up in phases,” Mr. Patnaik said. He emphasised the use of technology in imparting teaching.

Speaking on the occasion, School and Mass Education Minister Sameer Ranjan Dash said, “it is a sort of record as the recruitment process has been completed in just 47 days. As many as 2,236 teachers in Arts stream, 1779 in Science, 829 in Hindi, 796 in Sanskrit and three in Telugu will shortly join their duties.”

“Establishment of 9,943 new primary schools and 11,008 new upper primary schools is a reflection of a noble attempt to take education to remote and unreached regions. In 2001, the budgetary provision for education department was ₹1,325 crore. Now, it has been increased to ₹17,458 crore clocking a growth of over 1,300%,” Mr. Dash said