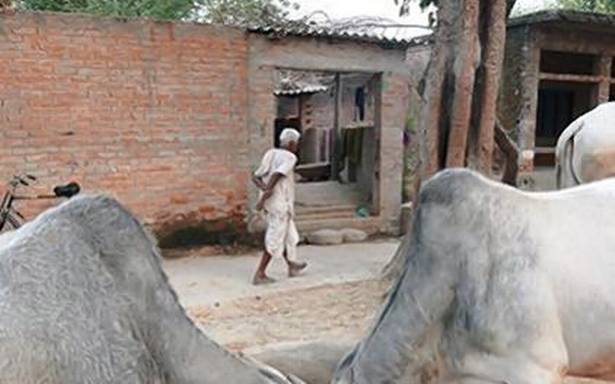 Farmers across the State say that cattle raid their fields, devouring the crops and causing huge losses.

Over 1.03 lakh stray cows have been adopted by 56,853 people in Uttar Pradesh as part of a scheme launched by the Yogi Adityanath-led Government to deal with the menace of stray cattle, according to officials.

The issue of stray cattle has become a major point of resentment among farmers across the State who say that cows and bulls raid their fields, devouring the crops and causing huge losses apart from adding to their infrastructural costs.

In addition to keeping the cows at these centres, the State Government has also implemented a scheme, ‘Mukhyamantri Nirashrit Besahara Govansh Sahbhagita Yojana’, under which interested farmers or livestock rearers would be allowed to adopt and nurture destitute cattle.

The person who adopts the cattle would be provided ₹900 per month per cattle head for the upbringing of the animal.

On November 22, Uttar Pradesh Chief Minister Yogi Adityanath instructed all district magistrates to ensure that destitute cattle did not roam about and that they be kept in cow shelters and be taken care of during winter.

A Government spokesperson said that under the Poshan Mission, 1,883 families with malnourished children were provided 1,894 destitute cows to ensure they have supply of milk.

The Government also said that it had established 3,458 ‘bhoosa’ banks or fodder banks across districts to supply fodder for destitute cattle and arranged 8.87 lakh quintal fodder for such animals.