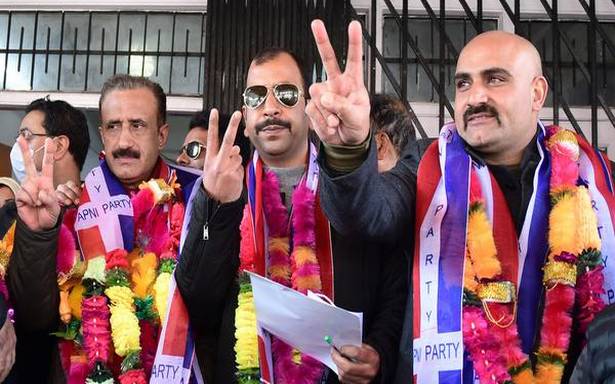 One year after the first-ever District Development Council (DDC) elections in J&K, the elected representatives in Srinagar complain of bureaucratic hurdles, exclusion in the decision-making, non-budgetary powers and poor accommodation.

“I am separated from my family members since I won the elections because of the security threat. The administration has failed to provide a decent accommodation to a chairperson and his family till date,” DDC chairperson, Srinagar, Malik Aftab, told The Hindu in an exclusive interview.

Contesting in an election for the first time in December last, Mr. Aftab managed to win the Soiteng segment in Srinagar, which has 14 DDC constituencies. In February, he defeated the Gupkar alliance members to become Srinagar’s first DDC chairperson.

Mr. Aftab lives in a single-room accommodation, which doubles up as an office and a meeting hall, at the guest house located in high-security Church Lane here. He fears the purpose of setting up a third-tier of elected representatives is failing to fulfil its purpose.

“Though ₹71 lakh is earmarked as the constituency development fund of Srinagar, my role as a chairperson is limited to monitoring. I have no right to allocate funds for different heads. I should have funds at my disposal for exigencies and emergencies in my constituency. That provision is not there. We are subservient to the Deputy Commissioners and their staff,” Mr. Aftab said.

He, however, praised the Divisional Commissioner and the Chief Secretary for keeping the channels of feedback open.

“It’s the bureaucrats who create hurdles. They are yet to realise that the new layer of representatives needs to be empowered. We get no response to the letters we forward to bureaucrats.

He said the DDC members put up 30 suggestions to the officers during the Block Diwas and the chairperson is yet to get any response from the bureaucrats.

The threat from militants also looms large on the members of the DDC. “We have no cars. Many DDC members who hail from the hilly side of Srinagar have been provided with Personal Security Officers. They come from humble background and can’t afford accommodation for the PSOs. Where will they keep the security?” he said.

Mr. Aftab was among several DDC members who met the visiting foreign delegations, also from the European Union (E.U.), after the Centre ended J&K’s special constitutional position in 2019 and projected the DDC elections as restoration of democratic exercise in J&K.

“The DDC polls were limited to achieve the political goals and meeting the foreign delegation. The real emancipations and delegation of powers is yet to take shape.”

Mr. Aftab takes pride in the Council being able to improve electrification and water supply in the upper reaches of Srinagar. “There is a lot of scope to improve peoples’ lives but requires more powers and cooperation from the bureaucrats,” he said.