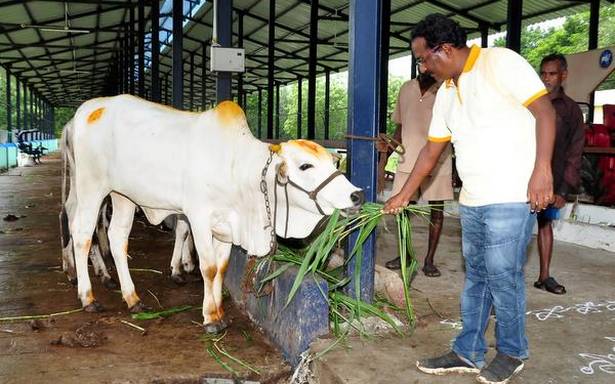 The average farmer had dumped the world famous Ongole breed of cattle and switched over to tractors and other farm equipment for all agricultural operations long time back. Now the cattle is back in favour thanks to the huge demand for the natively-bred cow milk and ghee and growing realisation among farmers to switch over to organic farming wherein cow dung is extensively used to restore soil health and produce healthy food. There is also a growing demand for cow urine for medicinal purpose.

Ongole ‘A2 cow milk’ (A2 allele of Beta Casein) now fetches a premium price of up to ₹150 per litre as health-conscious people consume it to build immunity against viral and other diseases, says a group of progressive farmers during a visit to the State-run Chadalawada cattle farm, 15 km from here, to procure well-bred cattle. The incidence of COVID-19 has led to further increase in demand for A2 cow milk, they add.

“The indigenous breed of animals possess A2 allele of Beta Casein as compared to exotic cattle which possess higher frequency of A1 type allele2,” explains Dr. B. Ravi, Deputy Director of the farm funded by the Centre under the Rashtriya Gokul Mission to nurture the Ongole cattle by taking up heifer rearing programme. The breed is sought after the world over as they are endowed with qualities of heat tolerance, resistance to diseases and ability to flourish under extreme climatic stress experienced of late due to global warming.

The farm now has 300 well-bred bulls and cows and is fully geared to meet the demand for providing commercially viable milch cattle to dairy farmers by selectively crossing with superior bulls selected after sibling and progeny testing, he tells The Hindu.

“We maintain a track record of the indigenous dairy breed for 20 generations,” he adds.

Cattle rearing has been a traditional livelihood of farmers in the district and they had come to the rescue of ryots at times of crop failure. But a majority of farmers switched to tractors leaving the task of preserving the Ongole cattle to racing enthusiasts. However, the skyrocketing price of diesel has led to a rethink among farmers and a return to the old ways of cultivation where the majestic humped Ongole bulls occupied an important position, explains a progressive farmer Ramachandra Rao, who has taken to zero-based natural farming in a big way at Chinarikatala near Podili.

It was in the Gudalakamma tract that the indigenous cattle had flourished for generations.