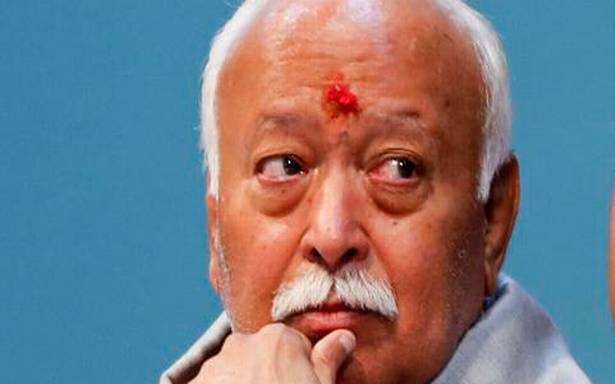 Rashtriya Swayamsevak Sangh (RSS) chief Mohan Bhagwat’s message on Sunday, on Muslims and to Muslims, is part of an ongoing, conscious effort by the Sangh Parivar to read down the history of Hindutva which has been defined in antagonistic terms with Muslims and Islam. The effort, it appears, is to transition from being a platform of grievance to one of governance.

“If a Hindu says that no Muslim should live here [in India], then that person is not a Hindu. Cow is a holy animal but the people who are lynching are going against Hindutva. Law should take its own course against them without any partiality,” Mr. Bhagwat said, at an event organised by the Muslim Rashtriya Manch, an RSS ally. He also urged Muslims to not live in fear.

Instances of mob lynching of Muslims and Dalits in the name of cow protection saw a sudden spike after the BJP won an absolute parliamentary majority in 2014. The Sangh Parivar had turned up the heat of its cow protection campaign ahead of the 2014 campaign as an instrument of religious polarisation. During the 2014 campaign, Narendra Modi, then the Prime Ministerial candidate, repeatedly spoke about ‘pink revolution,’ a reference to cow slaughter. The situation soon went out of control; even the electoral benefits that came of it turned unstable as Dalits whom the Sangh Parivar wanted a consolidate as Hindus were increasingly targeted by cow vigilantes. Mr. Modi then spoke out against vigilante violence. He and other Sangh leaders, including Mr. Bhagwat, have occasionally condemned the violence that came with cow protection but incidents continued and perpetrators remained unpunished. This background makes anyone sceptical of any change of heart for the Parivar. However, the reconciliatory message from Mr. Bhagwat is indicative of a pattern.

In December 2020, speaking on the occasion of the centenary of Aligarh Muslim University, Mr. Modi sought to reassure the Muslims amid the controversy surrounding the Citizenship (Amendment) Act. “The country is on the path where every citizen should be rest assured about their constitutional rights and their future. The country is on the path where no citizen would be left behind because of their religion…”

Two year earlier, in 2018, in a three-part lecture series before an audience that included foreign diplomats and correspondents Mr. Bhagwat had disowned some of the most controversial views of the second RSS chief M.S. Golwalkar. Responding to a question on Golwalkar referring to Muslims as enemies in his seminal work, Mr. Bhagwat said: “As far as Bunch of Thoughts [by Golwalkar] goes, every statement carries a context of time and circumstance…his enduring thoughts are in a popular edition in which we have removed all remarks that have a temporary context and retained those that will endure for ages. You won’t find the [Muslim-is-an-enemy] remark there.”

All these reflect an attempt by the Sangh to remake its approach to Muslims, perhaps for tactical reasons or due to a genuine evolution of its own ideology. This is not to suggest that the debate is settled once and for all and there will be no polarising rhetoric from the BJP in the future. Rather, what we see are the dilemmas of a confrontational ideology when it is called upon to govern. Assuming that the Sangh wants to tone down polarisation, it may not be able to do that so easily. An autonomous Hindutva politics has taken shape in the country which may not play by the script always. The challenge to the current leadership of the BJP is not only from political forces that are on its left. There are challenges from the right, and from within the Parivar. L.K. Advani’s Muslim outreach was nixed by a challenge from the right. Mr. Modi’s own Muslim outreach through his Sadbhavana Yatra’s in Gujarat in 2012 had to be aborted as it was destabilising the core Hindu voters. There are claimants, new and old, for the core Hindutva votes within the Parivar such as Yogi Adityanath and those who are not formally part of the Parivar such as Aam Aadmi Party supremo Arvind Kerjiwal who is trying his luck in Gujarat now. Delhi BJP leader Kapil Mishra whose rhetoric rained on Mr. Modi’s party to welcome former U.S. President Donald Trump in 2020 is flourishing. Segments of the digital troll army associated with Hindutva already think Mr. Modi has gone too soft and a more hard-line approach is required. A challenge to Mr. Modi from his right on the political spectrum is gradually taking shape. His governance challenges require him to be moderate; his political challenges will drag him to the right. These contradictory pulls will impact Mr. Modi’s outreach to Kashmir. More about that later.