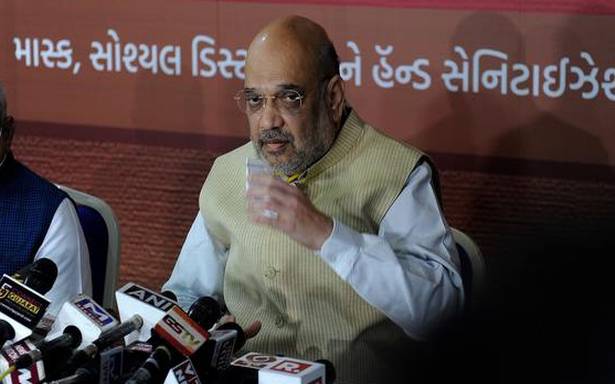 People of India are very good at understanding Pegasus chronology and connection, he says

Union Home Minister Amit Shah responded to disruptions in Parliament amid news reports on large scale snooping on journalists and prominent public figures via the software Pegasus, terming them as attempts by the Opposition to obstruct “India’s development trajectory” through ‘conspiracies’.

He wrote this in a blog on his website after both Houses of Parliament were adjourned for the day after the Opposition parties raised protests on fuel price hikes, the three controversial farm laws and the Pegasus snooping scandal, demanding a Joint Parliamentary Comission (JPC) probe on the snooping and Mr. Shah’s resignation.

The first day of the monsoon session left Prime Minister Narendra Modi unable to introduce his newly sworn in Ministers to both Houses of Parliament. Using a phrase often associated with him, Mr. Shah wrote, “People have often associated this phrase with me in a lighter vein but today I want to seriously say the timing of the selective leaks, the disruptions…Aap Chronology Samajhiye! [please understand the chronology] this is a report by the disruptors for the obstructors.”

“Disruptors are global organisations which do not like India to progress. Obstructors are political players in India who do not want India to progress. People of India are very good at understanding this chronology and connection,” he said.

Explained: Pegasus, the spyware that came in via WhatsApp

The BJP, which held a briefing by former Information and Technology Minister Ravi Shankar Prasad, also took the line of alleging a conspiracy in the timing and nature of the scandal.

“The BJP strongly refutes and condemns the baseless and bereft of political propriety comments levelled by the Congress against the BJP,” said Mr. Prasad. “The Congress is shrinking and losing and the entire row is timed to disrupt Parliament and build a baseless agenda,” he said.

“Have certain political leaders become a ‘supari agent’ of global organisations?” he asked, questioning the credentials of organisations like the Amnesty International, which he alleged had an “anti-India agenda” further alleging that it found it difficult to operate in India once it was asked to disclose details of its funding.

“If over 40 countries are using this software, why target only India? Any form of illegal surveillance isn’t possible with checks and balances in our laws and robust institutions,” he said citing the Telegraph Act, adding that “those who broke the story themselves did not claim that the presence of a particular number in the database does not confirm that it is infected with Pegasus”.

He said in the current digital world there were “thousands of databases” and that it was clarified which database these numbers had been sourced from.