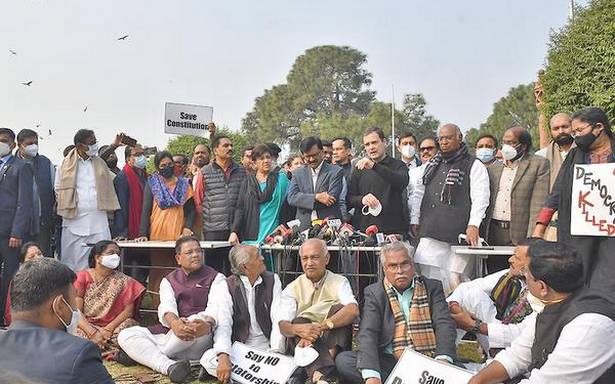 The idea was mooted by Congress’s Rajya Sabha member Rajamani Patel, who is among the 12 suspended MPs

The Opposition parties are likely to hold a mock parliament under the Mahatma Gandhi statue where 12 suspended MPs have been staging a protest for the last 16 days.

Many of the Opposition MPs will play the role of the ruling party, sources say, CPI(M) leader Elamaram Kareem will step into the shoes of Rajya Sabha Chairman Venkaiah Naidu while RJD leader Manoj K Jha will be Leader of House Piyush Goyal.

The idea was mooted by Congress’s Rajya Sabha member Rajamani Patel, who is among the 12 suspended MPs. “Our responsibility as a lawmaker does not end just because they have forced us outside the House. Since we are not allowed to do our duty within the House, we will do it outside,” he said.

At a morning meeting on Thursday, the Opposition leaders decided that instead of raising the issue of suspension in the Upper House, their agitation will be centred around the government’s reluctance to expel Minister of State for Home Affairs Ajay Mishra for his alleged involvement in the Lakhimpur Kheri incident.