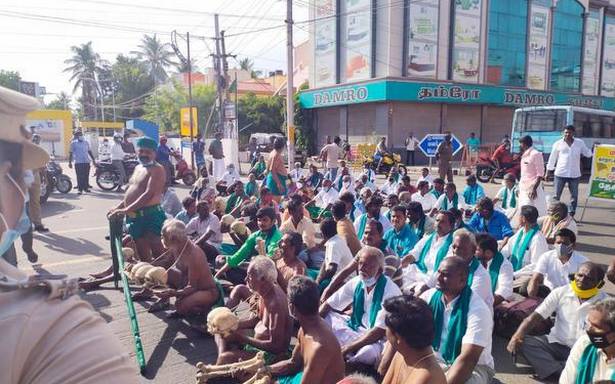 Over 100 farmers owing allegiance to Desiya Thennindhiya Nadhigal Inaippu Vivasayigal Sangam were detained here on Tuesday after they resorted to a road blockade opposing the construction of a dam at Mekedatu in Karnataka.

The protest, led by its State president P. Ayyakannu, was held on Karur Bypass Road in the city, leading to traffic hold-up for about 30 minutes during the morning peak hour.

Mr. Ayyakannu along with a group of farmers arrived in a procession from his house at Annamalai Nagar and squatted on the road and raised slogans in support of their demand. The protest lasted about 30 minutes.

The agitation by the farmers, some of whom did not wear shirts, threw traffic out of gear on the busy Karur By Pass road leading to police intervention.

A posse of police personnel evicted the farmers.

Police sources said 112 farmers were taken into custody and shifted to a wedding hall in Woraiyur in the city.

Mr. Ayyakannu, who had planned to visit New Delhi apparently to stage the agitation, in a memorandum to the Prime Minister urged him not to accord permission to Karnataka to build the dam at Mekedatu as it would destroy the Cauvery delta in Tamil Nadu.

He also appealed to the Prime Minister to sanction funds for the Cauvery-Godavari river link project.