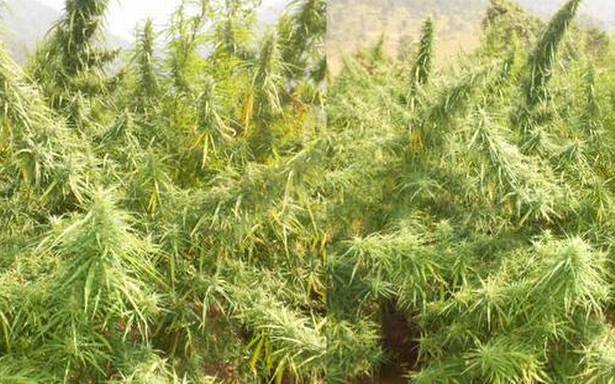 BHUBANESWAR: The Odisha police on September 20 seized more than three tonnes of ganja during vehicle checks across the State.

The Malkangiri district police intercepted a truck transporting 2.25 tonnes of ganja worth about ₹2 crore. This massive seizure has proved Odisha remains a major supplier of marijuana across the country.

According to the Malkangiri police, 94 packets of the drug were concealed inside coal on a truck. Police had set up a blockade near Chitrakonda, which is a gateway to Swabhiman Area and was once a stronghold of extremists.

“The truck was stopped as part of a routine check. Apart from the driver, there were people inside the truck. Police personnel became suspicious after noticing a small opening on the left side of the truck’s container,” said a statement issued by the police.

Upon searching, 94 packets of contraband ganja weighing 2,256 kg were found. The occupants of the truck revealed that they were taking the consignment from Chitrakonda to Chhattisgarh.

Similarly, the police personnel seized 1,250 kg of marijuana from a banana-laden truck on National Highway-16. The truck was headed towards Bhubaneswar. The value of the seized ganja is above ₹1 crore. Seven persons have been arrested.

The combined confiscation of 3 tonnes of ganja is one of the biggest single-day seizures in the history of Odisha. The State is already approaching a record haul of ganja in a year.

Odisha police have been on their toes as far as tracking ganja consignments in the State is concerned.

Aditya Mahakud, inspector-in-charge of Jeypore police station in Koraput district, said over 21,778 kg ganja had been seized between July 7, 2020, and August this year from his police station jurisdiction. Going by a conservative estimate of ₹10,000 per kg, the contraband is worth ₹21 crore.

The average annual seizure of ganja during the past 10 years has been 31,200 kg. The average confiscated quantity rose to 41,400 kg in the past five years. Though the enforcement agencies have turned the heat on smugglers, the contraband seizure has just kept rising.

According to Narcotic Control Bureau, cannabis, produced from the cannabis sativa plant, is used in three forms – herbal cannabis, dried leaves and flowering tops. Cannabis is also known as ganja or weed. Cannabis resin, the pressed secretions of the plant, is known as ‘hashish’ or ‘charas’.

Given the remoteness and hilly terrain, southern Odisha districts Koraput and Malkangiri are stated to be major producers of cannabis. A substantial portion of ganja is harvested in vast remote forest areas close to Jalaput dam that separates Odisha from Andhra Pradesh. Smugglers use boats to dispatch ganja consignments to different villages. Also, peddlers come up with different packaging methods to deceive enforcement agencies and transport it along NH-26.

Of late, the Special Task Force constituted under Crime Branch of State police has been successful in tracking ganja consignments.

Though the State’s Excise Department, NCB and State police have been destroying hemp plantation on fields, it is not enough to cover the entire cultivation. In 2019-20, hemp plants were destroyed over 18,295 acres of land and it went up to 23,538 acres in 2020-21. Despite this, criminals managed to harvest a massive amount of ganja in the State.

“Upon getting a digital map of cannabis cultivation area, we act jointly with State police and NCB. Our major focus is to destroy the plant on the field itself,” said Asish Singh, State Excise Commissioner.

Investigators came across a spike in demand for weed during the COVID-19 pandemic. They attribute the seizures of ganja in Odisha to the non-availability of trains due to COVID-19 lockdown that forced peddlers to take the road route.

“Smugglers innovate new ways of transporting ganja on a daily basis. They pack weed on ambulances, trucks carrying postal documents and fish feed gunny bags, besides oxygen cylinders. It is not humanly possible to check every vehicle plying on the roads. We rely on our sources on the ground,” said Mr. Mahakud.

Of late, smugglers of ganja have learnt from their mistakes. Most of them have stopped using mobile phones to avoid surveillance. Even if they do, they use WhatsApp to talk to each other. It is alleged that handlers from Uttar Pradesh, Bihar and Rajasthan have started investing in hemp cultivation, assuring villagers in remote Odisha to buy back products.

Cannabis cultivation promises easy money, though it involves huge risk. Many jails in Koraput and Malkangiri are full of people found guilty of involvement in ganja transportation.

Top police officers admit that though the force has stepped up its vigilance, smugglers have managed to transport ganja consignments out of the State’s borders.