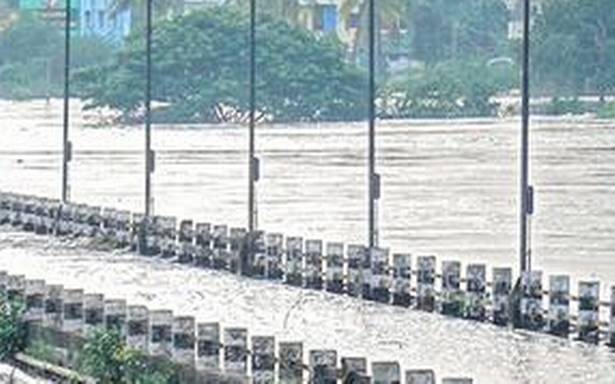 More than 300 people residing on the banks of Sankarabarani have been evacuated to safer places after river water entered their dwelling units on Friday.

Revenue officials, with the help of NDRF and fire service personnel, rescued people residing in N. R Nagar in Edianchavady, Nonankuppam and Ariyapalayam. They have been moved to nearby government schools, said an official.

As many as 239 people were rescued from N R Nagar, he added.

Water entered the villages as a result of rise in Sankarabarani following the opening of the Veedur dam.

Traffic along the century-old bridge over Sankarabarani near Villianur was closed and diverted through Thirukanchi area, said the official.

Almost all the low-lying areas in Puducherry region were inundated due to the rain. The region received around 19 cm of rainfall on Thursday alone.

In the town, water receded without causing much damage, he added.

As many as 82 huts and 27 houses sustained damage.

Interacting with reporters after visiting the rain-affected areas, Chief Minister N. Rangasamy said the damage caused by the rain was being assessed. A report would be soon sent to the Centre for an interim relief.

Home Minister A. Namassivayam said he had requested the Centre to depute a Central team to the Union Territory to assess the damage caused by the recent rain.