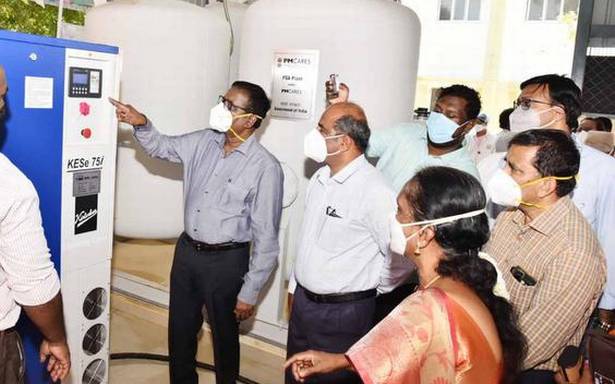 The plant was set up at a cost of ₹1.75 crore. The apparatus itself cost ₹1.25 crore and civil works, including laying pipelines, were done by the Public Works Department for ₹ 50 lakh. The plant can supply oxygen to at least 500 beds and will help provide oxygen at 1,000 litres per minute to patients if the need arises. The hospital has two other PSA plants in smaller capacities.

In Sirkazhi in Mayiladuthurai district, a ₹1.20 crore-worth PSA plant of 1,000-litre capacity was set up at the Government Hospital. it can supply oxygen to 150 to 200 patients in a day.

Sirkazhi MLA M. Panneerselvam and Collector R. Lalitha took part and inspected the plant. Mr. Panneerselvam said that COVID-19 awareness programmes and vaccination camps were being conducted in the district, and urged the public to take the vaccine.