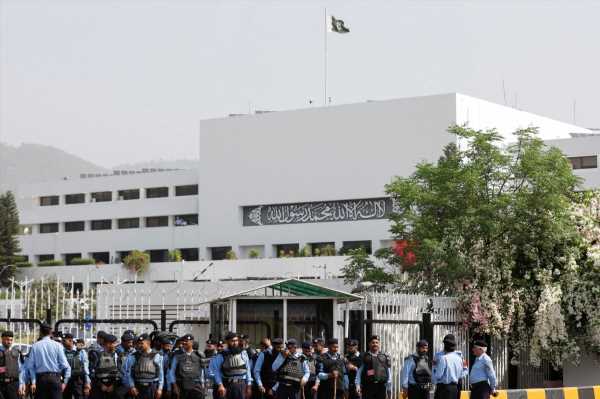 National Assembly proceedings were adjourned in the early hours of Sunday and the House will meet again on April 11 at 2 pm to elect the new premier after Pakistan Prime Minister Imran Khan was removed from office through a no-confidence vote.

Ayaz Sadiq of Pakistan Muslim League-Nawaz, who was chairing the crucial session, said the nomination papers for the new prime minister may be submitted by 2 pm on Sunday and the scrutiny would be done by 3 pm.

He summoned the session on Monday at 11 am and said the new premier would be elected then. However, the National Assembly of Pakistan later informed on its official Twitter account that the House will meet at 2 pm.

Earlier, Sadiq was nominated by Speaker Asad Qaiser to chair the session after the leader of Imran Khan’s party, Pakistan Tehreek-e-Insaf, announced to step down as it was not possible for him to continue.
Sadiq immediately started the voting process.

The joint Opposition — a rainbow of socialist, liberal and radically religious parties — secured the support of 174 members in the 342-member National Assembly, more than the needed strength of 172 to oust the prime minister on a day full of drama and multiple adjournments of the Lower House.

No prime minister in Pakistan’s history was ever ousted through a no-confidence motion. Khan is the first premier whose fate was decided through a trust vote.

Also, no Pakistani prime minister has ever completed a full five-year term in office.

Khan, 69, was not present in the lower house at the time of voting. His party lawmakers staged a walkout during the voting. However, PTI’s dissident members were present in the house and sat on the government benches.

The removal of Khan has set in motion the process to elect the new leader of the house.